Naul instills parts of self into show

Naul instills parts of self into show 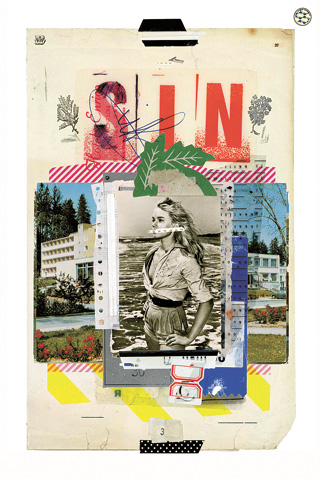 Naul’s one-of-a-kind voice has won him a firm fanbase since he debuted in 2011 as a member of R&B group Brown Eyed Soul.

However, not many of the ardent followers mesmerized by his high and fragile notes are aware that their favorite musician studied Western painting in college and has been steadily holding solo and group art exhibitions inside and outside of Korea.

In Naul’s ninth show, titled “Collagearl,” which opened to the public on Saturday, the 36-year-old reveals a large part of his personal life, including his childhood memories, his religion and his musical preferences.

To create a large impact, Naul has made collages, piecing together objects, texts and images that symbolize his very own disconnected interests.

“I like combinations of materials that don’t match well,” said the artist during a small press conference held in Jean Gallery, an exhibition venue in Jongno District, central Seoul.

“The objects used in my work are either things that are neglected or should’ve been thrown away.”

The second floor of the two-story gallery is dedicated to “Collage for Infancy,” a new 12-piece series by Naul.

The singer, who admits that he has a stronger ego as an artist than as a musician, stitched together objects he collects from his daily life, such as scribbles, sketches he did when he was 3 to 4 years old, photos obtained from overseas and even receipts to create his art.

The completed collages, which are originally about the size of an A4 piece of paper, are reproduced on a larger scale silkscreen or scanned copies. Both the original and the enlarged print can be seen at the show.

“I scanned every individual object and enlarged them separately, which took a lot of time,” he said.

“I feel a catharsis when a small collage oozes out something completely different when printed in much bigger size.”

Old black-and-white photos obtained from friends who traveled overseas appear in several of his works.

When asked about the subjects of the photos, who are mostly African-American, the singer-artist said this choice derives from his adoration for their music. 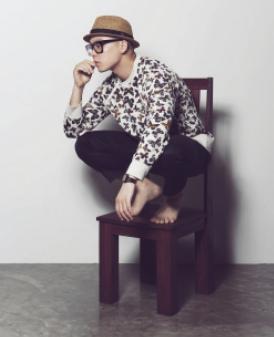 Naul is holding his ninth solo show, “Collagearl.” Provided by the gallery

“I have been completely immersed in their music since I was in seventh grade. They were the sources for much of my past work [art and music], too.”

As a faithful Christian, the religion inspired his works in terms of subject matter as well.

Although not a born-Christian, Naul is known for his faithful devotion to religion. He defines the Bible as “the truth” and has titled many of his works with biblical terms such as “Ecclesia” and “Anagennao,” which mean church and born again, respectively.

“I don’t intend to force any religious meaning on people because conveying my artworks as a whole image is more important,” he said. “Only those who share my religion will see the hidden meanings.”

The show runs through April 30. Admission is free. Opening hours are from 10 a.m. to 6 p.m. from Tuesday to Friday. On Saturday and Sunday, it runs until 5 p.m.