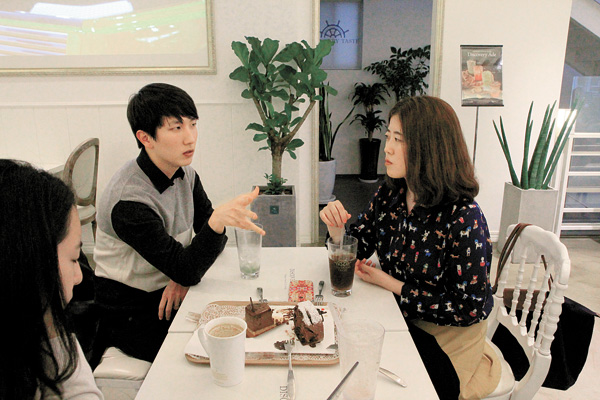 College campuses today better resemble factories, their libraries filled with students preparing for job openings until late in the night. Instead of studying for their majors, most students spend their college years more focused on polishing their resume, desperate to at least make the first cut when applying for jobs after graduation.

Strumming guitar strings on campus lawns while sipping on cold beers seems like a distant memory as job openings, particularly at conglomerates, have dwindled in the stagnant economy. In fact, the unemployment rate of youth between the ages 15 and 29 has reached the highest in 16 years, or 11 percent in February.

Recognizing the problem and its potential risk for future growth, the Park Geun-hye administration has been trying to bring about a fundamental change in the labor market with little success. The government has been trying to encourage young people to take bolder chances not in conglomerates, but in small and midsize companies. They’re told that vast opportunities await them in starting their own business and tapping into their imagination and creativity, thus contributing to the future growth of a creative economy.

Yet college students still anxiously search for job openings at conglomerates instead. At Samsung, roughly 200,000 college graduates or those who are in their last year apply for jobs every year. This year, slightly less than 100,000 applicants are said to have applied for the conglomerate’s job openings in the first half.

The Korea JoongAng Daily recently met with two college students to discuss the high unemployment rate and why students still prefer to turn in their applications to conglomerates instead of at small and midsize companies.

“If SMEs offer an enhanced working environment and salary, I’d be willing to work at one of them,” said Kim Byul-ah, 22, a business administration major at Ewha Womans University, alongside Yook Dong-hyung, 22, an economics major at Sogang University, during an interview on the last weekend of March. The two emphasized that college students these days wouldn’t mind working for SMEs if the salaries and employee benefits would improve.

Kim’s eventual career goal is to work in the art business, but she says she will start off her first career in business administration because of the money. She needs to pay off her student loan and then earn enough for graduate school, which today is a key factor in landing a better job or getting promoted. Her solution is to start her career at a large conglomerate, where the starting annual base wage is usually around 40 million won ($36,200).

Yook has taken a semester off to focus on studying for the civil service exam, with the aim of working as a civil servant in the central government. “Working at private companies, whether big or small, may pay better than government jobs but I think I would feel like I’m just a part of cogwheel,” he says. “Plus, I’d be exposed to the threat of layoffs. Working for the government, my employment status will be stable.”

Q. What makes the majority of college graduate job applicants focus on working for conglomerates or government organizations, even while SMEs have a hard time finding quality workers?

A. Kim: I’d say it is because college graduates’ top priority is finding a stable job, which means both enough money and stable employment. The government’s proposal in the ongoing labor market reform conversation seems like it will eventually generate more temporary positions and make it more convenient for employers to fire contract workers. Large conglomerates, state-run companies and government organizations are tough workplaces, of course. But they are more likely to have systematic employee management and welfare rules than SMEs. Conglomerates may put more performance pressure on their employees than SMEs, but, at the same time, they compensate accordingly.

Conglomerates and the public sector are simply more exposed to advanced corporate trends, both in terms of business and organizational management culture. I learned that the global labor market nowadays tends to get more flexible - the overall population of contract workers rises and receives performance-based salaries.

But in other countries, I think that overall wage level of contract workers is high enough to make a basic living and ensure employee welfare. In Korea, that is not the case. Both employers and employees tend to consider that it is obvious to work overtime, while employees are locked in the corporate culture where they can’t speak up to raise such issues.

Why do you think young job seekers these days avoid working at SMEs in such tough job market?

Kim: College grads are now so desperate that we actually submit dozens of applications during every hiring season. Many of them are to SMEs. What’s really interesting is that my friends who actually applied to SMEs say the SMEs are even pickier than conglomerates, with many of them looking for a high level of specs [such as a prestigious alma mater, standardized test scores and skill certificates] that the conglomerates nowadays tend to consider less when recruiting, because they can only afford to hire selected few. I also heard that they avoid hiring the unexperienced because many tend to leave the company after training, during which the workers get worn out due to poor working conditions. Therefore the companies end up just hiring experienced workers so they can save the cost and time for training. Now this has become a widespread perception among job seekers: SMEs are picky, pay less, are harsher to work at and offer fewer employee benefits.

Yook: I want to add that one of the significant factors in why we don’t choose SMEs is because in Korean industrial structure those SMEs are simply subcontractors of conglomerates. It’s a very rare case that Korean SMEs grow into a competitor of conglomerates. I don’t want to spend my time and passion somewhere that doesn’t have much future vision.

What types of changes do you think Korean SMEs need to attract quality talents?

Kim: More job slots or opportunities are not what we are looking for from SMEs. If there are more SMEs like JenniferSoft, paying for the overtime work, providing larger base salaries, respecting each employee’s working style, while allowing them take breaks when needed, I wouldn’t wish for a job at a conglomerate. JenniferSoft is a small company with only some 20 employees outside of Seoul, but many consider it the so-called “God’s workplace” because of flexible working environment, high salary and the respect workers get. Even if the company spends a lot on their personnel costs, it hasn’t gone bankrupt because the compensation level raises workers’ motivation and responsibility. If SMEs offer enhanced working environment and salary, I’ll be willing to work at one of them.

The government’s labor market overhaul plan has been designed to provide better job stability and employee welfare to contract workers at the expense of regular workers, which is why the nation’s labor unions are opposed to the government’s proposal. What is your take on this policy direction?

Yook: I think the basic purpose of government’s reformation plan is wrong, because it doesn’t enhance situations for anyone, neither the contract nor regular workers. The problem is that the definition of “contract worker” in Korea means those workers who get lower salaries and fewer benefits while delivering the same-quality work. The “contract worker” should literally mean workers who work less than regular workers.

And even if the government’s reformation plan is accepted and implemented, contract workers will still remain low-quality job holders in our society, who can’t be compensated with the equivalent level of the pay and benefits as regular workers. Young people will still spend money and time to become regular workers. If the ongoing trilateral [government, labor and management] conversation gets employers to extend the minimum length of contracts from two years to four years, it will mean nothing as long as they can lay them off at the end of the day and if salary levels remain lower than regular workers.

Kim: Overall wage level, which is usually lower than basic living expenses, is another problem, in particular for contract workers and college student part-timers, or alba.

If the Korean minimum wage is really set at a level that means college student part-timers can cover some portion of their living expenses, and if contract workers’ monthly pay is proportionately valued in accordance with their level of experience and performance, then they wouldn’t work overtime or work a second or third job. Some will voluntarily choose to work part time in order to use the rest of their time for other purposes, for example, moms caring for their children and freelancers studying part time.

Yook: I think this should have been the government’s focus, in making the labor market flexible. What the trilateral negotiation group has been discussing is mostly about labor trying not to lose salary level and employment status for regular workers, while management saying it can’t spend more on personnel costs.

Kim: This way, the labor reformation won’t benefit anyone, neither regular nor contract workers, because the negotiation group’s focus is on making the management’s employment method more flexible. If the conversation doesn’t focus on enhancing pay and benefits for contract workers near the regular workers’ level, many employers will end up saving their personnel costs by simply hiring more cheap contract workers. Many of us college graduates will have to move between contract jobs while working overtime with low salaries in order to extend our contracts.

What do you think should be done to enhance the labor market’s flexibility?

Yook: The government’s labor market overhaul proposal, and also the labor and management, focuses on narrowing the payment and welfare gap between regular and contract workers. I think they should instead try to make working hours the only difference between the two groups, and should provide an environment in which contract workers can get a subsequent job much easier.

And above all employers should be ready to allocate more to pay a reasonable salary to contract workers. I hope they don’t force extra hours but hire more part-timers instead.

Kim: Local conglomerates are already being forced by the government to create new business projects, and so the companies may squeeze on hiring. The government needs to offer tax breaks and hiring subsidies.

I hope the employers implement the peak wage system, as the government said in its proposal, so that the older generation works longer and the employers can hire more young workers. Those high-level workers may get reemployed at SMEs to help the small companies or train young workers.