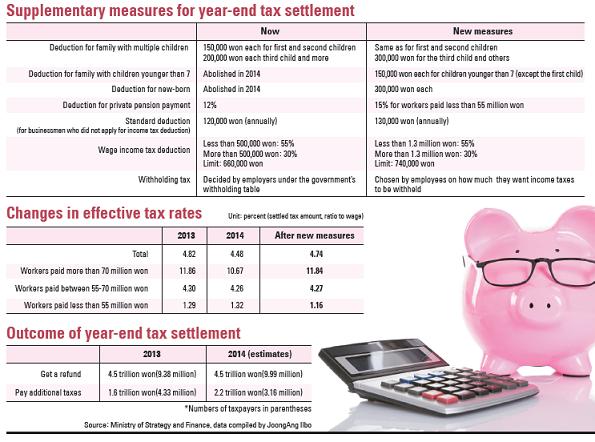 After facing a public outcry over higher tax bills for 2014, the government announced tax refunds for low-wage earners who paid more under the new income tax law.

The Ministry of Strategy and Finance issued an official statement saying it launched a full-scale audit of income taxes paid by 16.7 million people to determine which low-income earners paid more taxes.

Authorities said they expect to give average refunds of 80,000 won ($73.52) to about 5.41 million taxpayers. That includes about 2.05 million workers whose annual salaries were less than 55 million won.

The announcement admitted the error in the government’s initial announcement in 2013 that the new law would charge no extra tax to workers earning less than 55 million won annually.

It also said that middle-income earners would only pay nominal increases, which also turned out not to be true. Many people had substantially higher tax bills for 2014.

In the Tuesday report, the Finance Ministry admitted that about 15 percent of low-paid workers saw increases in their taxes.

“Although 85 percent of workers with less than 55 million won in annual salary were not charged more taxes under the new law, there were some cases [the remaining 15 percent] that saw a greater tax burden because of some particular conditions in their household, such as a one-person household or a family with more than two children,” said Finance Minister Choi Kyung-hwan at a meeting with ruling Saenuri Party leaders on Tuesday.

“If a bill containing supplementary measures is passed in the National Assembly and enacted later, we expect about 5.41 million people, including workers with less than 55 million won in annual salary, to benefit from a tax cut totaling 422.7 billion won,” he said.

According to the Finance Ministry, 98.5 percent of the 2.05 million low-salaried workers, about 2.02 million, will get refunds for the full amount of the increase in their taxes.

About 90 percent of the remaining 27,000 workers would also receive a partial tax refund, the ministry said.

On top of the 2 million low-paid workers, the 3 million taxpayers who would get a tax refund include workers who have more than two children; those who gave birth or adopted a child; and those who pay for workplace pensions.

In August 2013, the Finance Ministry announced an ambitious new income tax law to raise tax revenue, ostensibly by collecting more from high-wage workers. The change was part of the government’s effort to expand social welfare benefits for underprivileged people.

Some NGOs warned that the new law would levy more tax on low-earning workers. The Korea Taxpayers Association, one of those NGOs, said the government is still trying to cover up its blunders.

“The Finance Ministry announced there were only 15 percent of low-salaried workers with increased taxes, but that was wrong,” the association said in a press release Tuesday following the ministry’s statement. “They included workers who quit or got a job last year, so if excluding them, the 2.05 million workers are about 24 percent of all low-salaried workers of 8.5 million.”