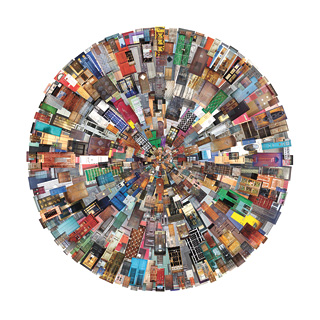 To April 14: “Composition” is a show by Lee Kang-hoon, who creates digital paintings using images of doors as their basic units, symbolizing the border between the self, the other and the imperfect communication between the two sides.

THE STORY OF BOHEMIAN GLASS

To April 26: In “The Story of Bohemian Glass” visitors can explore the Czech Republic’s glass art, which spans from medieval times to now.

About 340 intricate pieces are on display, many of them flown in from the National Museum, Prague, and the Museum of Decorative Arts.

The items show the abundant number of ways glassware can be presented using various color techniques. Among the exhibits, the 14th century “Stained Glass Window with Apostle” is believed to be the oldest stained glass remaining in the European country today.

Admission is free. The museum closes every Monday. Opening hours are extended on Wednesdays and Saturdays to 9 p.m. Go to Ichon Station (line Nos. 1 and 4), exit 2.

To May 17: Italian artist Novello Finotti’s solo exhibition features 38 sculptures made primarily of marble and bronze. Finotti’s works, which are figurative and largely based on the human body, appear to be deeply rooted in a tradition of Italian sculpture spearheaded by masters such as Michelangelo and Antonio Canova.

At the same time, Finotti’s repertoire spins stories full of complicated, symbolic layers with a fusion of mythology, literature and modern history.

Admission is 9,000 won ($8.13) for adults and includes admission to Seokpajeong, a hanok (traditional Korean house) behind the museum that was once the summer residence of King Gojong’s father.

Seokpajeong is open until 6 p.m.

To May 25: An in-depth, large-scale retrospective of Park Hyunki (1942-2000), considered to be one of the Korean pioneers of video art along with Nam June Paik, is currently showing at the Museum of Modern and Contemporary Art, Gwacheon.

Unlike the U.S.-based Paik, who was active outside of Korea and only became involved in the local scene from the mid-1980s, Park has been experimenting with video inside the country since the late 1970s.

Most of the pieces on show have magically realistic tones, including those by Polish artist Wilhelm Sasnal, British artist Lynette Yiadom-Boakye and American artist Hernan Bas.

They are mostly landscapes and portraits of images that can be seen in reality but are simultaneously improbable or have mysterious details.