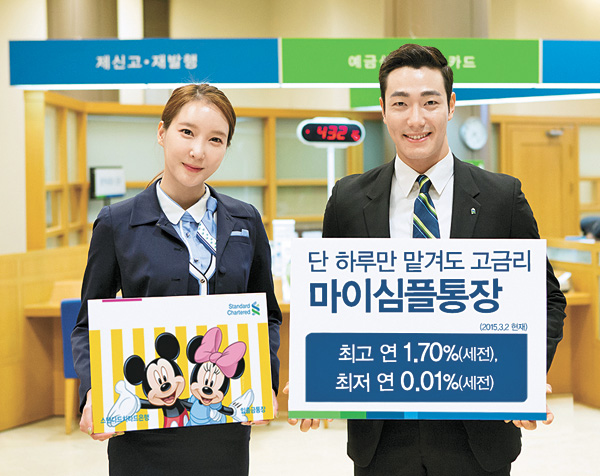 It has become impossible to find time-deposit savings accounts that offer interest rates higher than 2 percent these days.

But even amid the lowest-ever interest rates, banks are at least trying to do something to please customers by promoting money market deposit accounts (MMDAs) that offer higher daily interest rates than regular time deposits.

The lowest time-deposit rate is 1.4 percent, while the highest is 1.95 percent. The rate drop has been rapid in the past month since the central bank lowered its key interest rate to a record low of 1.75 percent.

According to a Bank of Korea survey, total income from interest for individual households stood at 43 trillion won ($39.4 billion) last year, down about 3 percent from a year earlier and the lowest since 2007. 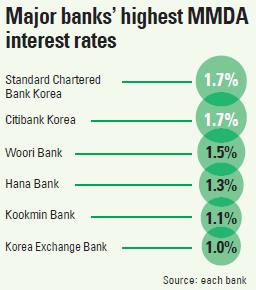 Interest income started declining when cuts began in 2011. In June of that year, the benchmark interest rate was 3.25 percent.

The MMDA is one of the most popular types of savings accounts due to its high interest rate, while also keeping assets liquid at all times. Deposits are free at all participating debit and credit facilities, which enables customers to conduct even more convenient transactions while enjoying profitable returns.

The MMDA was used by commercial banks to compete with securities firms’ money market fund products when the interest rate was high in the past.

Standard Chartered’s My Simple Account is a popular MMDA that has maintained an interest rate of 1.7 percent. The bank’s MMDA offers 0.01 percent interest on deposits of less than 3 million won. Deposits above that amount earn an additional 1.7 percent.

One of main features of the London-based bank’s MMDA is that the interest rate applies the same day funds are deposited.

The bank also recommends its higher-end MMDA that provides a maximum 1.9 percent rate for deposits of 40 million won or more.

“When you want to accrue savings in a short span of time, it is more effective to choose a stable and safe deposit product than a product that requires risk,” said an employee at Standard Chartered Bank’s Seoul branch. “Putting some idle money in MMDAs helps savings these days when consumers can’t expect much interest income.”

As much as 4.7 trillion won had been deposited in My Simple Accounts as of late February.

Citibank Korea also has an MMDA product that was launched last year. Dubbed Cham Chakhan Account, meaning “very nice” in Korean, the product offers 0.2 percent interest on deposits of up to 10 million won, 1.4 percent for 10 to 30 million won and 1.7 percent for more than 50 million won. As much as 2.4 trillion won was deposited in the product as of late February.

The two foreign banks’ MMDAs have been competitive, with higher interest rates compared to local commercial banks. But Korean banks also are promoting the MMDA, noticing its recent growth.

Woori Bank’s Godanbaek MMDA’s deposit balance surged nearly 15 percent to 2.7 trillion won over the past year, according to the bank.

“Recently, many customers are canceling their installment deposits or time-deposit accounts and switching to MMDAs,” said an employee at Woori Bank.