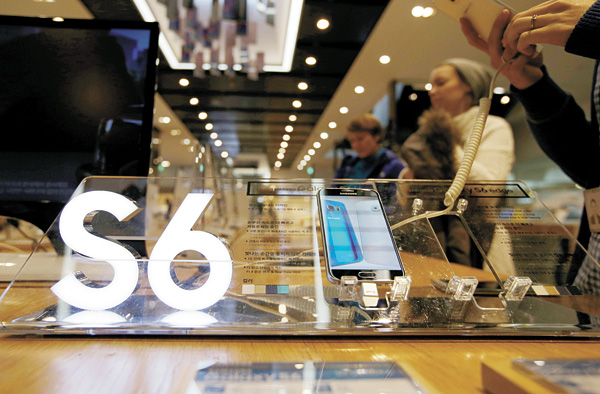 Samsung Electronics posted an operating profit of 5.9 trillion won ($5.4 billion) in the three months ending March 31, up 11.5 percent from the previous quarter but down 30.5 percent year on year, according to an earnings guidance the top smartphone vendor released Tuesday.

Revenues for the same period totaled 47 trillion won, declining 10.9 percent from the previous quarter and 12.4 percent from a year earlier. The smaller-than-expected revenues are attributed to seasonally low demand for IT products. All figures disclosed Tuesday are based on the median of the earnings estimate range.

“Out of 5.9 trillion won operating profit for the first quarter, 3.2 trillion won is estimated to have come from semiconductors and 2.4 trillion won from IM,” said Lee Seung-woo, an analyst with IBK Investment & Securities. “When semiconductors are traded overseas the dominant currency used is U.S. dollars, and that product segment benefited directly from a strong dollar.” 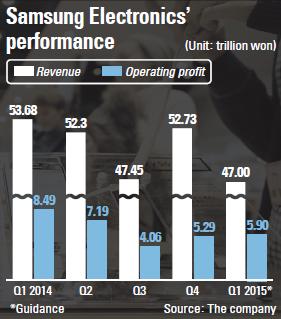 “DRAM prices were weaker than expected in the January-March period but that factor has been offset by an advance in market share and the stronger U.S. dollar,” said Jin Sung-hye, an analyst with KTB Securities.

Operating profit at Samsung’s IM division reached as high as 6.4 trillion won in the first quarter of 2014 but tumbled to as low as 1.8 trillion won in the third quarter as sales of smartphones flagged due to competition from archrival Apple in the high-end and emerging Chinese competitors such as Xiaomi in the lower-price category.

Operating profit rebounded to 2 trillion won in the fourth quarter and again in the first quarter of this year largely because of increased average prices of premium products such as the Galaxy Note 4, reduced inventory of mobile phones and efforts to slash marketing expenditures, according to analysts.

Earnings guidances do not traditionally provide detailed numbers for business divisions. The official earnings report is set to be released later this month.

Samsung saw its operating profit in the quarter ending last September dip below 5 trillion won for the first time in three years, but recovered the 5 trillion won range in the fourth quarter and maintained that momentum through the first three months of this year.

The world’s top TV producer saw its profit apex in the third quarter of 2013, when it posted a record operating profit of 10.2 trillion won on robust sales of the Galaxy S4 across the globe. Its follow-up model, S5, released last April, had disappointing sales. But the new S6 series is projected to sell up to 20 percent more than the S5.

Lee of IBK Investment & Securities forecast 8 trillion won in operating profit for the second quarter as the well-reviewed flagship smartphones Galaxy S6 and S6 Edge are set to go on sale offline this Friday. FN Guide’s average estimate for the April-June period stands at 6.8 trillion won.

The more S6s are sold, the better for the semiconductor division, too, since the new smartphones are powered by Samsung’s self-developed Exynos 7420 application processors and NAND flash storages.

The S6 and its cousin the S6 Edge sport all-new designs that look and feel significantly different from their predecessors. They also have technology for a new, easy-to-use payment service called Samsung Pay. The resolution of the rear camera is upgraded to 16 megapixels, up from 13 in the S5.