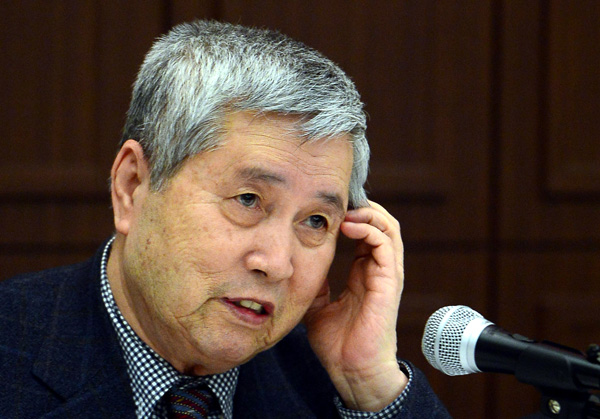 The Korean Film Archive announced on Tuesday that it has discovered 94 old Korean films - the largest number found together - that were thought to have been lost or destroyed.

The state-run foundation said it has received a donation of 450 Korean movies from the 1940s to the 1980s from Han Kyu-ho, the president of Union Media Company, which used to tour around the nation holding screenings in the 1970s when there were no permanent theaters.

“It is the first time in the history of our archive and probably the last for this many films to be discovered at once,” said Lee Byung-hoon, the director of the KFA during a press conference Tuesday at the Press Center in central Seoul.

“I greatly pay my deepest gratitude to the directors and others who showed overwhelming joy for this discovery,” Lee added.

Some of Korea’s most illustrious directors such as Im Kwon-taek (pictured left), Kim Soo-yong, Jung Jin-woo and Choi Ha-won, whose early films were included in the retrieved movies, also attended the event to join the celebratory mood.

Although not in perfect condition, the newly found films were screened for five minutes each during the event.

“I hoped those films would never be discovered and had become lost somewhere,” joked Im, who has directed 102 films since 1962.

The newly discovered movie is his 14th, which can be considered one of his early works. Its title roughly translates into “Battlefield and Mistress” in English.

“I feel embarrassed to watch this again, but nonetheless, the film shows well the landscapes of Korea and the conditions of filming at the time. I think it can be a useful resource,” the 78-year-old director said.

Director Choi was reunited with his debut film, “Trees On a Slope” (1968).

“I felt grief at losing my debut work,” he said.

“But now that I can finally see it again, I am so glad and deeply moved. It reminded me of the times when we made movies out of nothing. It was the spirit that led us,” he said.

Five of the films revealed to the media on Tuesday will be available for the public to watch when their restoration process is completed by the end of this year.