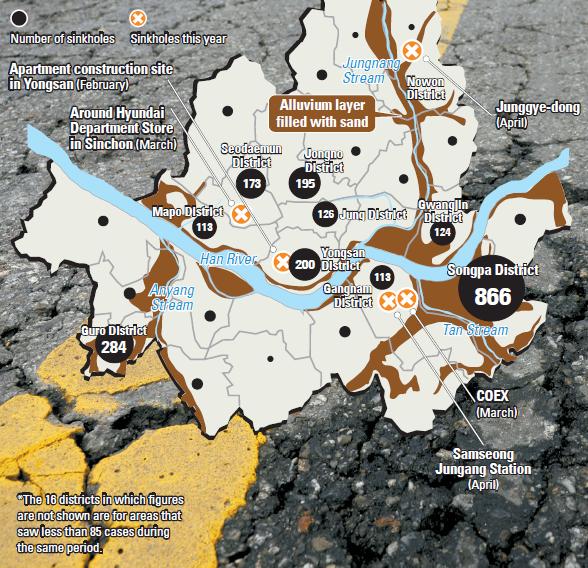 The road by Samseongjungang Station on subway line No. 9 was cordoned off by safety fences on Monday morning as eight city employees operated heavy equipment to repair the street.

The area is where six small sinkholes formed last week, a development that has become increasingly commonplace over the past year and led to a number of accidents and injuries.

On Thursday, a vehicle stopped for a red light at an intersection on the road near the station and tipped into the street after the ground gave way beneath it.

No casualties were reported, and the Seoul Metropolitan Government later explained that the sewer pipe running under the road had leaked and eroded the soil around it, destabilizing the ground.

Earlier, a portion of another road just half a mile from the station caved in on March 29, bringing down a 19-year-old motorbike driver and the accompanying passenger.

The sinkholes that have formed along the pathway of subway line No. 9 are reminiscent of the large-scale underground cavities found last year underneath the Seokchon Underpass in southeastern Seoul - one of which stretched for about 80 meters. Those depressions were formed due to subway line construction.

According to a city government management plan acquired exclusively by the JoongAng Ilbo, road collapses increased by an average of about 29 percent annually from 2010 to 2014.

Notably, 31 percent, or 866 of cases from 2010 to 2014, occurred in Songpa District. That figure was three to four times higher than in Guro District, which had the second-highest instances at 10 percent (284), while Yongsan District followed with 7 percent (200).

The Jamsil area in Songpa District was formerly an island separated by a tributary of the Han River, which was later filled with sand and gravel to make use of the space.

However, districts located north of the Han River, with ground mostly made out of granite, have seen fewer sinkholes.

Experts say that some of the primary reasons why sinkholes have formed along subway line No. 9 are the unstable geological nature of the area, poor oversight over large-scale construction like the subway and deteriorated sewer pipes underneath.

But as the city gets older, analysts expect to see more of them, particularly when looking at cases like Tokyo, which experiences more than 1,000 surface collapses annually due to sewage pipe leaks.

The city government has vowed to reinforce old pipelines until 2018, though it has yet to collect the 1 trillion won ($0.9 billion) in necessary funds.

Poor construction management has also proved to be a precarious issue that has contributed to accidents, including those that have occurred along subway line No. 9.

On March 29, a 25-ton tanker truck tipped over in Sinchon, western Seoul, after the road suddenly collapsed underneath it. And in February, a young couple was injured after the sidewalk beneath them collapsed near Yongsan Station.

Experts say it is critical to take notes from other countries, like Singapore, where large sinkholes formed around local subway construction sites in 2013 and 2014. “Singapore operates a report-maintenance-repair system 24/7 for effective road management,” said Oh Jae-il, a construction engineering professor at Chung-Ang University.

He also said “it established a department dedicated to road management and is setting up a database of geological data and underground facilities.”