Lions lefty gets his 100th win

Lions lefty gets his 100th win 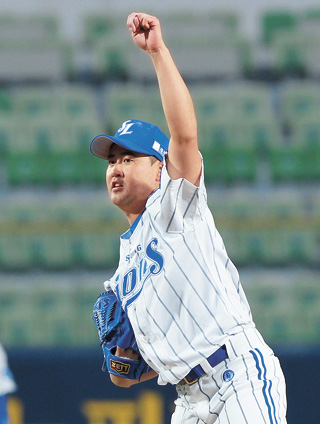 Samsung Lions pitcher Jang Won-sam on Tuesday made his first start of the season against Lotte Giants and collected a 3-1 victory for the team.

But this wasn’t just any win for Jang: It was his 100th win in the Korea Baseball Organization (KBO).

Jang allowed only one run in six and 1/3 innings against the Giants at the Daegu Baseball Stadium. Although the 31-year-old allowed three base-on-balls and three hits including a home run, it was enough to cool down the Giants’ scorching batters, who produced 14 hits and scored 16 against the Doosan Bears on Sunday.

Jang’s 100th win comes 238 games after he made his professional debut in 2006 with the now-defunct Hyundai Unicorns. He is the 24th pitcher to reach 100th wins in the KBO, but as for lefty pitchers, Jang is only the second after former Hanwha Eagles pitcher Song Jin-woo, who has most wins in the KBO at 210.

Ryu Hyun-jin, who now plays for the Los Angeles Dodgers, collected 98 wins for seven seasons in the KBO before leaving to play in Major League in 2013.

“I wasn’t feeling well before the start of season, so I felt pressure about my first start,” Jang said to reporters after the Tuesday’s game. “I just want to thank my teammates.”

The Changwon-born pitcher played for the Lions since 2010, when he transferred from the Woori Heroes (now the Nexen Heroes). The Lions paid 2 billion won ($1.8 million) and traded two players to sign Jang.

“When I first turned professional, I never thought I would collect 100 wins. But because our bullpen is really good, I easily collected more wins than pitchers of others teams,” he said.

On Tuesday, Jang gave up one run to the Giants in the top of the fifth inning after Giants catcher Kang Min-ho pulled off a solo home run to center. Kang, who delivered three home runs against the Doosan Bears, also hit double from Jang in the top of the second inning.

“It wasn’t my mistake, but I think Kang’s hitting instincts are really good,” Jang said for the home run. “Since the Giants have been showing really good at batting I just wanted to avoid home runs. Luckily, I allowed just one.”

In the seventh inning, Jang got his first out after Kim Dae-woo hit a grounder to second base, but after allowing base-on-balls to Jung Hoon, he was replaced with Shin Yong-woon on the mound. Jang threw 97 pitches.

The Lions this season are expecting another good season from Jang. The lefty, who also has a gold medal from Korea’s victory in 2008 Beijing Olympics, collected two-digit wins for the last three seasons while playing more than 150 innings.

For this season, Jang said he hired a personal trainer for the first time to enhance his stamina and power through weight training.

Jang, who also represented Korea in two World Baseball Classic events, said that among his victories in the KBO, his 100th win will be remembered the most.

“I don’t even have the baseball from any of my other KBO wins,” he said. “But this time, my manager personally gave me the ball, so it’s more meaningful to me.”

Jang’s 100th win is chased by younger lefty pitchers like Kim Kwang-hyun of the SK Wyverns and Yang Hyeon-jong of the Kia Tigers. The 28-year-old Kim so far has 84 wins, while the 27-year-old Yang has 63 wins. But for the Lions, they believe Jang’s durability and consistency would last longer.

“Jang is a pitcher who has a text book pitching form,” said the Lions manager Ryu Joong-il. “We hope for him to have long career of playing.”