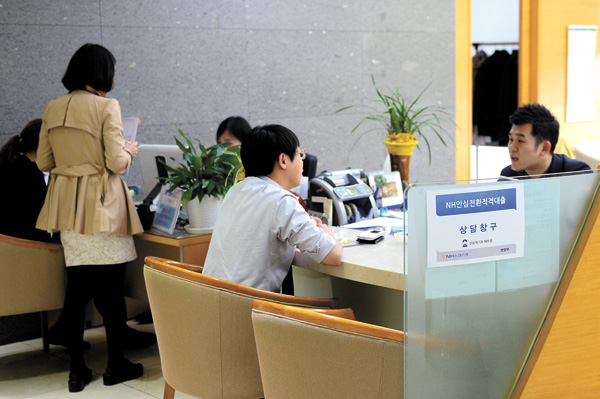 Household loans issued by commercial banks surged 4.6 trillion won ($4.2 billion) to reach 570.6 trillion won as of March, said a Bank of Korea report on the financial market on Wednesday.

The amount of mortgage loans surged nearly nine times compared to the first quarter of 2014, the report showed, fueling concerns about further growth in the total debt shouldered by households.

The report issued an alarming signal to the financial market, which has been supportive of the central bank’s loosened financial regulation, lower interest rates and eased loan issuances aimed at reviving the sluggish real estate market.

For the first three months of the year, the household loans pending at commercial banks kept posting new records, indicating that debt growth is accelerating. 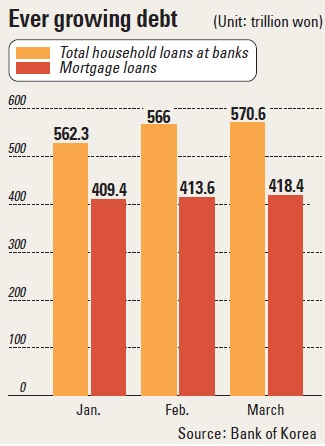 The amount of mortgage loans issued by commercial banks stood at 418.4 trillion won in March, rising 4.8 trillion won from a month earlier, the data showed. The monthly growth is the highest since March 2008.

From January through March, as much as 11.6 trillion won in mortgages were issued, marking the highest-ever first-quarter growth.

For the first quarter, the aggregate household loans including the mortgages surged 9.7 trillion won compared to the previous quarter. In the same period last year, the quarterly growth stood at just 200 billion won.

The report was released a day before the central bank convenes its monetary policy committee to set the benchmark interest rate for next month.

The governor described the March rate cut a “preemptive action” to help boost growth momentum, while dismissing worries about deflation or recession.

“I am aware of some side effects such as the growing household debt after the three rate cuts,” Lee said. “In adjusting the benchmark rate, I will try to make the best decision by comparing the positives and negatives of rate cuts.”

In March, the BOK unexpectedly cut the base rate to a record low of 1.75 percent as the governor stressed the need for the central bank’s support for economic recovery momentum. It was the third rate cut by Gov. Lee following the first in August and the second in October.