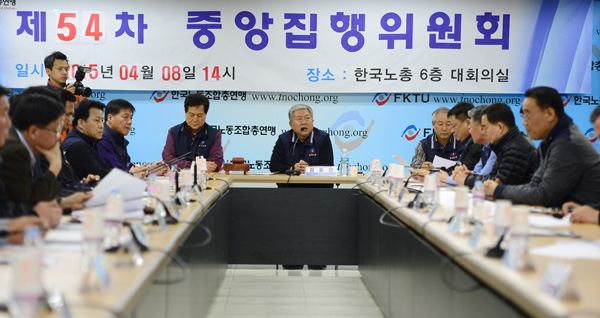 Top officials of the Federation of Korean Trade Unions including President Kim Dong-man, center, announce that negotiations with the government and representatives of businesses on reforms for the labor market have failed. During a press briefing held at the umbrella labor union group’s headquarters in Yeouido, Seoul, on Wednesday, the FKTU said it will no longer participate in the negotiations, which it said concentrated on lowering wages, making it easier for companies to fire employees and expanding the role of contract workers at the expense of salaried workers. They claimed the government and corporate sector wanted sacrifices from labor alone. The trilateral party failed to reach an agreement before the deadline on March 31. [NEWSIS]