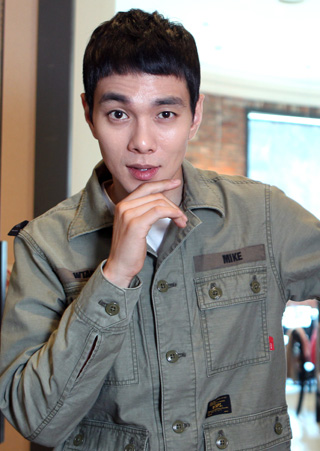 It all started when he appeared in MBC’s “Radio Star” last September, when he wasn’t even signed up to an agency.

Since then, a lot has changed.

Lee is now with Mystic Entertainment and has gigs lined up on eight variety shows for at least the first half of the year, including MBC’s military-themed reality TV show “Real Men.”

Critics say the 35-year-old is having a second heyday.

Lee says he never thought he would be doing something other than acting and didn’t really realize appearances on entertainment programs would boost his career.

“I didn’t think entertainment shows would help,” he said, “Nor did I think it would be my work.”

But now, he says his perception of the programs has changed, especially if it brings him closer to the audience and his fans.

Q. You are now a rising star on Korean entertainment shows. How do you feel about that?

A. I didn’t really realize the importance of entertainment shows in the past. I just thought it could be extra work, but that was it. I never thought it would be my work, and in a way defined it as something outside my territory. But my perception has changed. If my participation in entertainment shows helps people recognize me and gets them to talk about me, I believe being in these programs could be helpful for my future work in drama series and film. I hope to raise my share, so to speak, in entertainment shows so that they help me out with my acting career.

With my past work [in dramas], I often felt apologetic to my co-actors and the production crew because I did not draw much media and public attention, as I was not that famous or the talk of the town.

How did you get to appear in “Radio Star” in the first place? Did you expect the response to be this strong?

I wasn’t even signed up to a talent agency back then. But one of the writers of the show was a friend of mine and suggested that I appear on it. I never used to monitor my appearances - neither in drama series nor entertainment shows, because it’s kind of embarrassing. But after the show, so many people contacted me, and I became the most-searched word on web portals. I was quite surprised by the power of entertainment shows.

What is it like to be back in the military in MBC’s “Real Men”?

I was in the military between 2002 and 2004, so I’m back after 10 years. It was interesting because so much has changed - the outfit, the welfare as well as the period of conscription. But that doesn’t make training any easier. Even one day in training is really demanding.

But “Real Men” is challenging both physically and mentally.

What would you say you got out of “Real Man”?

I got really close with the show’s other participants. It’s actually quite hard for me to make friends in show business. I usually only get to meet those in acting, but with “Real Men” I got to meet others in show business and befriend them. I particularly got close to comedian Kim Young-cheol. He’s chatty 24 hours a day, but he and I click well.

I have never really been in a commercial. When I was with my previous talent agency, I was in a beer commercial, but with others and not by myself.

I hope I can shoot a commercial for a business suit. I also can’t wait to choose my next piece [drama series or film]. I don’t think I’m in a position to be picky. Whichever role I’m given, I will do my best.