CJ Group has designs on fostering the future of culture

CJ Group has designs on fostering the future of culture 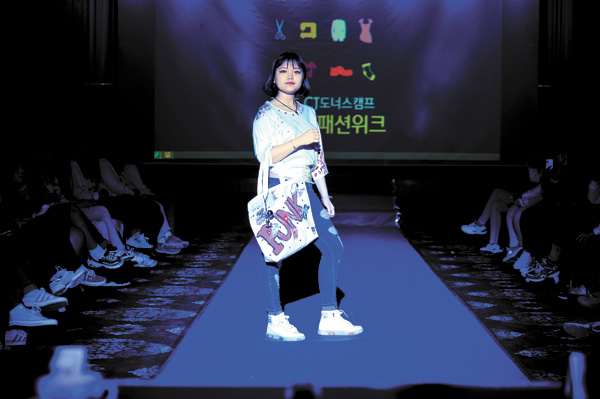 A student struts down the runway in an outfit she designed at the CJ Dream Building Fashion Week late last month. Provided by CJ Group

Around the same period, however, another fashion week was held.

It didn’t draw in any hot, young celebrities, nor was it featured as the top story in the press.

But the participating designers - all in their teens - were just as passionate as those involved in SFW, event organizers said.

“CJ Dream Building Fashion Week,” which is part of CJ’s main culture patronage program, Donors Camp, invited 100 middle and high school students seeking a career in fashion design and taught them how to be fashion designers - from the very early stages of planning to sending their clothes down the catwalk.

“CJ Donors Camp has been helping teenagers who are seeking a career in various cultural segments to experience what it’s like to be actual professionals in the field since 2013,” said Jeon Soon-dal, a publicist at CJ Corporation.

“There used to be one camp where they could experience various areas like food, music, TV shopping, emceeing and screenplays. But we have rarely organized a camp in one specific area, so you can call it our first fashion design camp.”

Jeon said the idea came about because CJ noticed there were a lot of adolescents dreaming about becoming fashion designers.

Another reason is that the company has long been a partner of Tod’s, an Italian fashion brand known for its leather goods. Although it is not a fashion giant, CJ was able to successfully host the camp through the European apparel maker’s help. 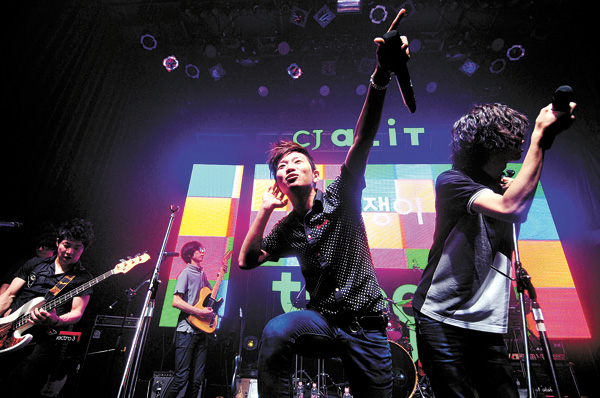 Today, CJ Group’s businesses are in the areas of food, entertainment and media, and retail and logistics.

“Everybody has strengths and weaknesses. The key is being able to use your weaknesses for good, turning them into positive energy,” designer Kaal E. Suktae told the students in his lecture on what it takes to work in fashion based on his own experiences.

The talk was just one part of the two-day camp. Afterwards students made clothes, accessories and shoes from their very own designs and inspirations. At the end of the program they walked down the runway sporting the items they made.

After taking part in the camp, Kim Ji-hun, a freshman at Wonmi High School in Bucheon, Gyeonggi, said he is now certain he wants to work in the clothing industry. “Before, I had just been vaguely thinking about a career in fashion,” he said. “I know now that I want to pursue this as a career.”

Giuseppe Cavallo, the country manager of Tod’s Korea, who attended the runway show, was impressed by the ideas and creativity of the students, CJ officials said. 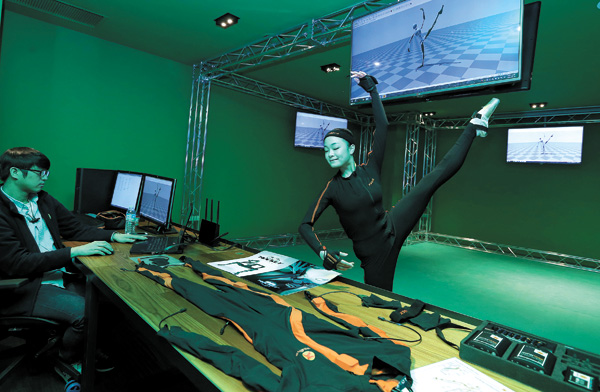 A ballerina dances at the Culture Creative Convergence Center’s motion studio. CJ opened the venue for artists to use free of charge. [NEWSIS]

Tod’s has been one of the sponsors of CJ Donors Camp for seven years now.

CJ Group said that the “CJ Dream Building Creativity School,” operated by CJ Donors Camp, is the group’s main patronage program in the area of culture and arts. It adds that it is in line with Chairman Lee Jay-Hyun’s belief that corporations should play the role of “guardians of young people’s dreams” - his words during a speech at a company workshop back in 2011. The program also reflects the CJ management’s philosophy that emphasizes talent and human resources.

The school “is more than vocational training,” CJ said in a press release. “We hope youngsters will get to deliberate on their dreams and future, and we hope to help both their dreams and characters mature and flourish.”

But even after young, talented individuals make it into the field, it’s hard for them to get a name for themselves unless they are signed to a large entertainment corporation or a talent agency such as SM Entertainment. 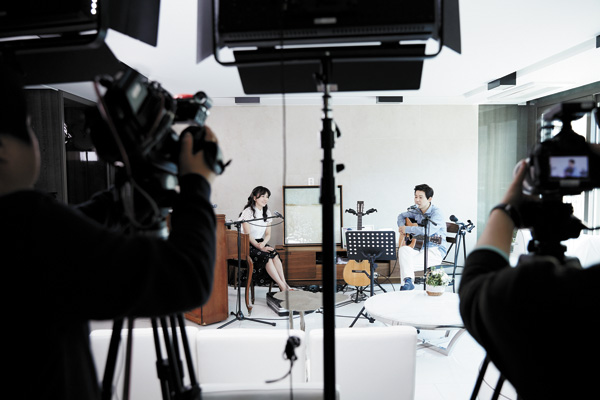 To take part in the government-led “Culture Day” initiative, which offers free or discounted cultural programs on the final Wednesday of every month, CJ E&M, an affiliate of CJ Group, held what it calls a “home concert” by singer couple Hey and Cho Kyu-chan on March 25. It was streamed live on the web portal Naver. Provided by CJ E&M

This is why CJ is also supporting young artists in music, film, animation, musicals and theater, who have landed a job in these cultural industries but are outside what it calls the “star system.”

The program is run by CJ Culture Foundation. It helps young artists with promotion, marketing and networking.

“It is hoped that the program will strengthen the country’s culture content .?.?. which will lead to bolstering Hallyu [the popularity of Korean pop culture abroad],” Jeon of CJ Group said.

Ultimately it intends to help Korea become a cultural research and development hub, she added.

Under the “Tune Up” program, the foundation selects young musicians and connects them with established musicians, helping them to get tips, release albums and perform on stage. Musicians such as Kim Chang-wan Band, Kang Saneh, Deli Spice, Clazziquai and Hareem have been long-time mentors in this program.

The company also runs the “Project S” program in which it helps talented young drama and film scriptwriters succeed by giving them professional consulting and fees for classes and research. “My PS Partner” (2012), a romantic comedy featuring Ji Sung and Kim A-joong, was a result of the program. Director Byun Sung-hyun applied to the program with the idea for the movie in 2010. Two years later he made a commercially successful debut with it. “My PS Partner” attracted 1.83 million viewers, which is not a bad start for an entry-level filmmaker.

“Creative Minds,” on the other hand, is a support program for up-and-coming musical and theater writers and directors. “Moby Dick,” a 2010 musical, is one of the pieces that benefitted from the program. It won awards at the Seoul Musical Festival.


Time is running out

The programs are noteworthy given that experts have repeatedly said Hallyu is in trouble.

“Big Bang will continue to be popular, but there won’t be the ‘next Big Bang.’” said Joon Ahn, the head of CJ E&M’s music division, referring to one of the most well-known K-pop boy bands outside of Korea.

Experts say there are fake Korean boy bands and girl bands in China, which is working against Hallyu. In the case of Japan, due to soured diplomatic relations, Korean stars are not allowed to appear on morning shows, which are often the venues through which foreign celebrities gain recognition in the country.

Against this backdrop, CJ E&M, a CJ affiliate of entertainment and media business, and the Ministry of Culture, Sports and Tourism have joined hands to foster young talent who have innovative ideas that could potentially be the next big thing in the field of “convergence content,” which merges seemingly unrelated industries such as technology and art.

The two opened the Culture Creative Convergence Center in the CJ E&M headquarters in Sangam-dong, western Seoul, last month. The center, which CJ injected more than 10 billion won ($8.9 million) into, is a free-of-charge, high-tech and trendy workplace for amateur content creators. It is filled with all the necessary equipment, including sound and audio systems, digital archives and a motion studio, needed to produce cultural content.

Under the program, the first of its kind in Korea, free or discounted cultural activities are made available on the final Wednesday of each month, which the government has designated as Culture Day. The rates apply to admission to galleries, museums, musical performances, movies and sporting events.

CJ E&M has not just participated in Culture Day - it has brought new meaning to it. On March 25, the final Wednesday of March, married singers Hey and Cho Kyu-chan held a concert in their house. It was streamed live on the web portal Naver.

Jee Seung-yeon, a publicist with CJ E&M, said the response was positive.

“The number of views, including streaming and downloads, was 26,500, according to Naver,” Jee said, adding that the company plans to hold similar at-home concerts every other Culture Day. On months when these shows are not held, CJ E&M will hold lectures from renowned culture professionals.

This month, the speaker will be director Kim Won-seok of tvN office drama “Misaeng,” which became an unexpectedly explosive success and social phenomenon when it aired in December. The venue has not yet been chosen.