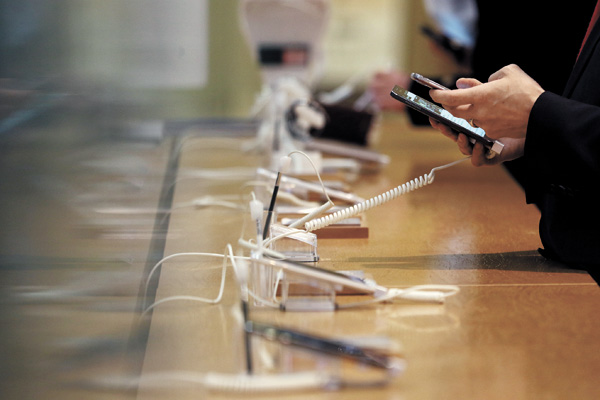 With the change, consumers can choose either a lump-sum discount of up to 330,000 won ($302) towards a new mobile phone’s price when purchasing it at retail, or a monthly discount of up to 20 percent towards their phone bill every month. Both benefits only apply to consumers who are subscribing with a two-year contract.

When added to the maximum 15 percent subsidy that can be paid by individual mobile phone retailers, consumers will be able to get a total discount of up to 379,500 won.

The announcement was made by the Korea Communications Commission (KCC) and the Ministry of Science, ICT and Future Planning, the two groups in charge of the mobile market, on Wednesday afternoon in response to accusations that the Mobile Act hasn’t actually benefited consumers.

The act, intended to allow more people to benefit from discounts, offers customers two options: a one-time discount on the price of a smartphone, which each telecom carrier designates depending on the device’s time of release and popularity, or a recurring discount on monthly telecom bills.

The second option applied not only to new smartphone buyers, but also to consumers bringing their used phones or new devices purchased at locations outside the telecom retailers, like an online mall or overseas Apple store.

The government’s latest move raised the current lump-sum subsidy limit on new mobile phone by 10 percent to 330,000 won, up from 300,000 won. It will then raise monthly phone bill discount rates to 20 percent, from 12 percent, beginning April 24. Users already getting the 12 percent discount will automatically begin receiving the higher subsidy.

“Consumers are primarily interested in how much cheaper smartphones can get,” said KCC Chairman Choi Sung-joon at the commission’s plenary meeting held Wednesday morning.

“If the government’s device subsidy rises, then smartphone manufacturers will accordingly have more money to spend on promotional subsidies [offered to mobile carriers]. I think this will eventually help lower actual consumer prices.”

This is a somewhat unexpected move since the two government organizations have held their ground over the last six months, despite public criticism that the subsidy was still too low compared with the actual smartphone prices designated by manufacturers.

The KCC said it finally landed on the decision in recognition that the act hasn’t really reduced monthly telecom bills.

“We kept track of people’s mobile telecom service consumption pattern for four months immediately after the act took effect in October, but so few consumers were benefiting from the new policy because they simply weren’t informed about it,” said Jo Kyu-jo, head of the telecommunication policy division at ICT Ministry. “So we thought the government ought to push this policy harder on the market in order to benefit more telecom consumers”

The three mobile carriers expressed worries about the discount raises.

“From a private telecom operator’s point of view, we’re concerned about the extra costs we’ll face as the device subsidy limit is raised,” said a KT official, who requested not to be named, during a phone interview with the Korea JoongAng Daily. “Because the legal discount raises are aimed to benefit all subscribers, unlike those in the past that benefited only users with high-end monthly plans, we telecom operators will be the ones facing smaller revenue.”

“The raises are still too small,” wrote an Internet user on the nation’s largest portal Naver. “Plus, the act is so useless because consumers are almost forced to be bound under two-year contracts to maximize the discount benefit.

“I hope the government allows everyone with used phones, and all customers who don’t subscribe under multiple year contracts, to receive benefits.”