Tale of political corrosion at Posco

Tale of political corrosion at Posco 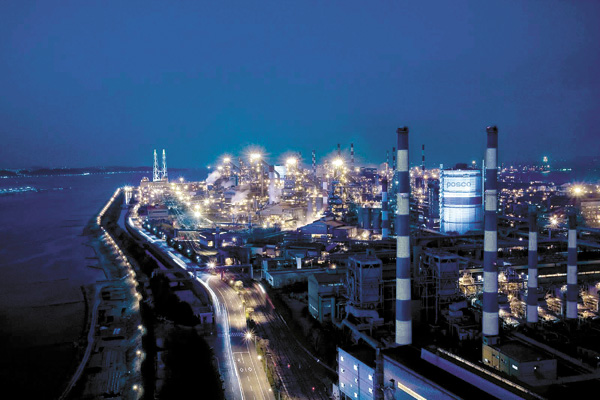 The nation’s leading steelmaker is being investigated by the Seoul Central District Prosecutors Office over an alleged slush fund of 10.7 billion won ($9.8 million) in Vietnam suspected to have been parked there by construction arm Posco Engineering & Construction (E&C).

The prosecution began its investigation by raiding Posco E&C headquarters and is expanding its search to the company’s business partners and even Chung Joon-yang, former chairman of Posco Group. Chung has been prohibited from leaving the country by the prosecution on suspicion of dereliction of duty for allegedly overseeing investments totaling about 7.66 trillion won in questionable mergers and acquisitions from February 2009 to March 2014.

It might look like the prosecution is just trying to stamp out a conglomerate’s corruption, but Posco has endured similar treatment every time a new administration was inaugurated and has never been able to break through the shadow of political influence after the state-funded company was privatized in 2000.

The founder of Posco was Park Tae-joon, widely remembered as Korea’s “steel king.” During his 25 years of leadership as chairman starting in 1968, Posco reached an annual production output of 21 million tons of steel. A main reason behind the achievement was the huge support of Park Chung Hee, father of President Park Geun-hye and a military strongman who ruled the country from the 1960s to early 1980s.

The two Parks met at the Korea Military Academy in 1947. He soon became one of the closest aides to Park Chung Hee, who was 10 years older. When Park was preparing a military coup, he asked Park Tae-joon to take care of his family if the May 16 action did not succeed. After Park Chung Hee became de facto ruler of the country in 1961, he appointed Park Tae-joon as his chief secretary. Two years later, the strongman appointed him chairman of Korea Tungsten, which is now TaeguTec, a tungsten export company, and ordered him to lay the foundation for a steel company as he wanted the country to have a reliable base for the growth of its manufacturing industry. 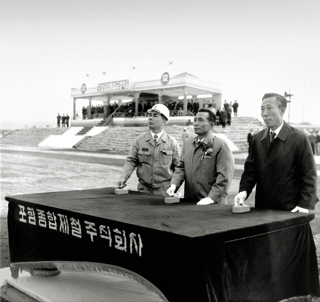 When Korea said it intended to begin producing steel, the United States, Japan and most other nations laughed at the plan. Korea’s per capita income was below $100 per year and total exports were $42 million in 1967, according to Posco. At that time, the cost for an integrated iron and steel mill was $150 million.

After failing to attract foreign investment, the Posco chairman asked the president if he could use funds from Korea’s claims against Japan for compulsory collection of property belonging to Koreans during the 36 years of colonial rule. In 1965, Japan agreed to pay $300 million over 10 years and offered $200 million in loans, interest-free for seven years and at 3.5 percent annually thereafter.

When the treaty that resulted in the compensation was made by the Park Chung Hee administration, the pubic criticized the president. People said he had sold the nation’s pride for money, since the compensation didn’t include Koreans’ mental and physical damages.

By using $73.7 million from Korea’s property claims against Japan and $50 million in Japanese bank loans, Posco was established in April 1968 as Pohang Iron and Steel.

Park Chung Hee continued to give enormous support to Posco. A 1970 memo obtained by JoongAng Sunday stipulates that Posco had the authority to choose its manufacturers and suppliers and contains a government guarantee in the event that urgent contracts were required. With the paper, signed by Park, the fledgling steelmaker could bypass restrictions that may have blocked its path toward expansion and economic strength. The president also showed his support by visiting Pohang 13 times during the three years the plant was under construction.

Only a year after the plant opened, Pohang Iron and Steel had $100 million in sales and paid off its debts. On April 1, 1970, a production facility with a capacity of 13 million tons of crude steel a year was completed, and the nation’s first blast furnace was built in June 1973. From 1970 to 1992, when Park resigned, the company posted 41.6 billion won in sales and 4.6 billion won in profit, increasing annual sales by 149 times and net profit by 40 times.

Until 1970, most of the world’s steelmakers operated as state-funded companies or under strict government supervision, as they were considered pivotal for the economy.

But the trend started changing in the 1980s as many nations started privatizing state-funded steel companies - including British Steel - to improve competitiveness in the global market. Competition was especially intense after the July 1998 establishment of the World Trade Organization, which promoted globalization.

At that time, the Korean government believed the relatively inflexible management structure of state-funded companies could be a barrier to growth. And after the IMF crisis in 1997, the government put Posco at the top of the privatization list as it wanted to use proceeds from the sale of its stake to finance overall economic restructuring.

Posco was privatized in October 2000 and established a governance structure under which a professional executive runs the business, overseen by a board of directors that represents the rights and interests of shareholders with the ultimate goal of maximizing corporate value. In order to do that, the company adopted a system of hiring outside directors as supervisors, a first for Korean conglomerates. At present, outside directors are more than 60 percent of the board.

“The new management system was adopted after privatization, but it couldn’t solve the company’s longtime headaches, which include the fact that the company is relatively easily impacted by external influences [including politics] compared to major conglomerates such as Samsung and Hyundai Group that have one top executive with absolute power,” an analyst said on condition of anonymity. “Outside directors were supposed to monitor the company’s business performance, but most of them were conscious of the government and never opposed someone obviously parachuted by the government as a new chairman.”

The bad relationship between Posco and the government began with its founder Park Tae-joon and the Kim Young-sam administration. Park was indicted by the prosecution on suspicion of bribery in February 1993. There were rumors he had become an object of hatred when Kim was a presidential candidate in 1992, after Park demanded that Kim pledge to adopt a parliamentary system of government. 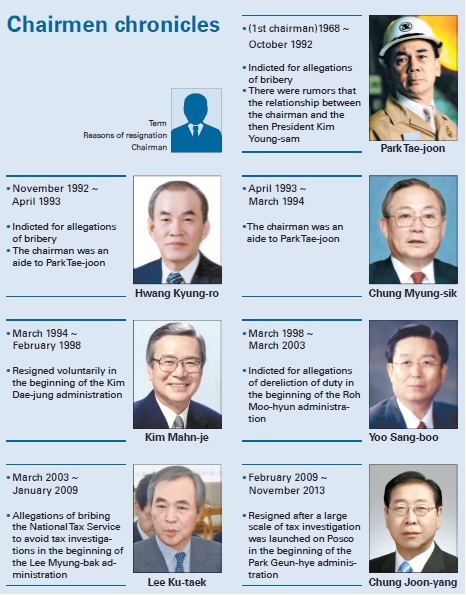 “We can’t deny that the company has been influenced by politics, considering that most of the chairmen left the company before they finished their terms,” said an executive of Posco. “Every time a new administration is inaugurated, we had to hold our breath because no one knew what was going to happen. And again, history is repeating itself this year.”

Most Posco chairmen since Park didn’t finish their terms. The sixth chairman, Lee Ku-taek, resigned amid a bribery investigation involving Lee Ju-sung, a former chief of the National Tax Service, allegedly to avoid a tax investigation in 2009 during the Lee Myung-bak administration.

The chairman’s seat later was taken by Chung Joon-yang, a close aide to the former president who now is under investigation.

Chung made some questionable M&As, and there is speculation that the prosecution isn’t only digging into whether the former chairman can be charged with dereliction of duty, but also whether he was influenced by the Lee administration.

“I don’t think shareholders would just sit back and watch if such things happened at companies,” said Kim Sang-jo, head of Solidarity for Economic Reform. “Posco’s governance system isn’t operating properly, since no one has an owner’s spirit. Since shareholders don’t positively deliver their opinions, people who don’t have the right to control the company are trying to exercise their power from outside. Shareholders, particularly institutional investors such as the state-run National Pension Service (NPS), need to step forward more positively to select appropriate CEOs and outside directors who are brave enough not to care about politics.”

Since Kwon Oh-joon became chairman, Posco has shown signs of recovery, posting 65 trillion won in sales and 3.2 trillion won in operating profit on a consolidated basis last year, though net profit dropped again from 1.3 trillion won in 2013 to 500 billion won last year. The company has been carrying out restructuring by selling deficit-ridden affiliates and improving its competitiveness in the steel business.

“One good sign is that Posco’s key business strategy of solution marketing [which focuses on not only providing products that customers want, but offering technology support and joint development projects] is appealing to clients,” said researcher Baek Jae-seung of Samsung Securities. “But it is hard to expect the company to show tangible results immediately. Rather than looking at how much it earns, we need to see how many more clients the company will have in the future, including in car steel sheet sales.”

Posco aims to earn 8.5 trillion won by 2016 before interest, taxes, depreciation and amortization, with a goal of selling 50 million tons of steel this year.

It plans to expand its global technical service centers from 23 to 29 this year.

“Companies like Posco operate in accordance with the government’s economic policy, as it is one of the nation’s major base industries, but the company should be independent from politics so it can consistently maintain its market competitiveness,” said Oh Deok-gyu of the Corporate Governance Service research institute.