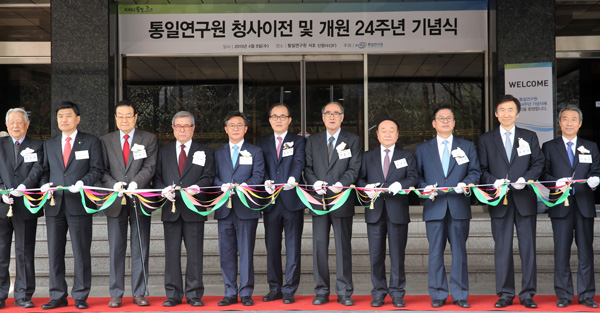 Former and incumbent government officials attend a tape-cutting ceremony on Wednesday to mark the opening of the Korea Institute for National Unification’s new office in Seocho District, southern Seoul. By Kang Jung-hyun

The head of the state-run research center for the unification with North Korea said that while the Kim Jong-un regime has managed to govern the reclusive state since it took power three years ago, it will nevertheless face a major test in two to three years.

“While it has shown more stability in its governance than expected, it will enter a phase of major tests in two to three years,” Choi Jin-wook, the president of the Korea Institute for National Unification, said in an interview with the JoongAng Ilbo.

Choi, who heads a think tank group dedicated to studying the North and finding ways to reunify the two Koreas, added that his organization will dedicate itself to coming up with studies that could potentially affect the government’s policy platforms on North Korea, rather than merely researching North Korean affairs.

“I aim to shift the main task [of the KINU] from conducting basic research into North Korean policies to contributing to government policy on North Korea,” he said during an interview on April 2, six days before the KINU opened its new headquarters office in Seocho District, southern Seoul.

On Wednesday, former and sitting senior government officials, including Foreign Affairs Minister Yun Byung-se and Unification Minister Hong Yong-pyo, attended the organization’s relocation ceremony at its new office, where Minster Hong said in an address that the government would strive to build up a “trust process” with North Korea in a bid toward reunification.

The KINU, established in 1991, has conducted studies on North Korea with researchers and been at the forefront of laying the foundation for national unification, which the Park Geun-hye government said would lead to a “jackpot.”

“We aim to become a global leader when it comes to North Korean studies. In that regard, we will produce authoritative and influential studies on North Korea so that Korean media and academia can reduce their dependence on similar research studies compiled by foreign academics.”

While predicting that the North Korean regime could face a major test in coming years, Choi called on the Park government not to rush to a summit with Pyongyang’s young leader, even under pressure to produce a breakthrough in stalled inter-Korean relations.

“Though the government could feel it is in need of something big [like a summit] to find a way out of the gridlock, it needs to remain calm about it.”

On Pyongyang’s annoyed response to the center’s annual publication of a North Korean human rights white paper detailing the sufferings of those across the border, Choi said the South should not feel burdened by the reaction from the regime, which blasted the report as fabricated.

“So far, we have concentrated on studying how research into North Korean human rights abuses has been conducted. But now we need to offer analysis and solutions as to how we can bring an end to these practices in the North. We also need to think about how we can translate our studies into actual policies on North Korea.”