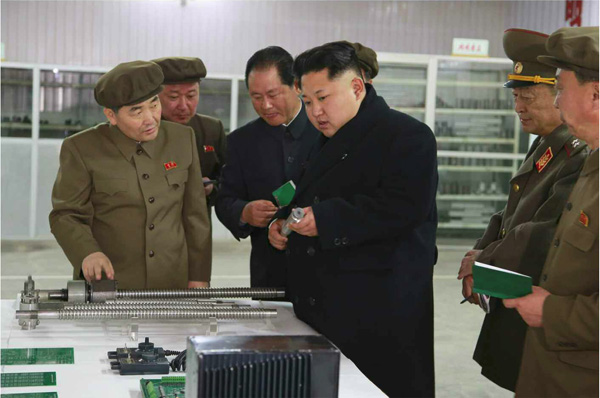 Pyongyang is capable of mounting a miniaturized nuclear warhead on an operational road-mobile intercontinental ballistic missile (ICBM) that can strike the United States, according to the head of the North American Aerospace Defense Command (Norad).

“Our assessment is that [Pyongyang has] the ability to put a nuclear weapon on a KN-08 and shoot it at the [U.S.] homeland,” Navy Adm. Bill Gortney, the commander of the U.S. Northern Command and Norad, said in a briefing Tuesday at the U.S. Department of Defense.

Some analysts initially suspected the missile was a mock-up.

In the latest update by a U.S. military official on the status of Pyongyang’s KN-08 long-range missile and its progress in miniaturizing a nuclear weapon to mount on it, Gortney said he believes North Korea has achieved a breakthrough.

“We assess that it is operational today,” based on intelligence assessments, Gortney said in a tone starkly different from that set by the commander of U.S. Forces Korea, Gen. Curtis Scaparrotti, less than six months ago.

When asked about the KN-08 in a Pentagon briefing in October, Scaparrotti said that the North may have the capability to miniaturize a nuclear warhead but was skeptical of its effectiveness.

“For something that’s that complex, without it being tested, the probability of it being effective is pretty darn low,” he said.

However, he added cautiously that Pyongyang may “have the technology to potentially actually deliver what they say they have.”

American analysts have estimated that the range of the missile is more than 10,000 kilometers (6,200 miles), which would put the mainland United States within its range.

But Gortney added there is no evidence indicating North Korea had tested the missile yet.

Because of its relocation capabilities as a truck-like system, the KN-08 can be potentially moved around in secret by North Korea, making it more difficult for Washington to locate it by satellite and target it.

The KN-08’s mobile nature “makes it very difficult for us to be able to counter it,” Gortney said, unlike long-range ballistic missiles fired from a fixed location.

Missiles that are mobile, such as the KN-08, “really impede our ability to find, fix and finish the threat,” he added.

However, he said he has “high confidence” that Washington would be capable of defending the country from a potential North Korean strike.

Director of National Intelligence James Clapper testified in February to the U.S. Senate Armed Services Committee that the North has taken “initial steps” in developing a long-range, nuclear-armed missile that is capable of posing a threat to the United States, and that the reclusive state has twice displayed the KN-08.

South Korea’s Defense White Paper 2014, revealed in January, stated that its Ministry of National Defense has not “detected a test-firing of the KN-08 missiles, which were first unveiled in a 2012 military parade, but we took into account Pyongyang’s claim that it successfully launched the Unha-3 in 2012.”

A Korean Defense Ministry official said Wednesday that Gortney’s remarks were not the official U.S. position.

North Korea’s inventory of about 1,000 missiles, which were built based on old Soviet technology, can already reach most targets in Northeast Asia, according to a report released by the U.S.-Korea Institute at the Johns Hopkins School of Advanced International Studies and the National Defense University’s Center for the Study of Weapons of Mass Destruction.

The report, published Tuesday on Johns Hopkin’s 38 North website, said the KN-08 may achieve an “‘emergency operational status’ by 2020 before, or with very limited, flight testing.”

Aerospace engineer John Schilling and U.S.-Korea Institute researcher Henry Kan said in the report that recent analysis shows that the KN-08 may be able to reach the West Coast of the United States carrying a warhead package weighing 500 to 700 kilograms.