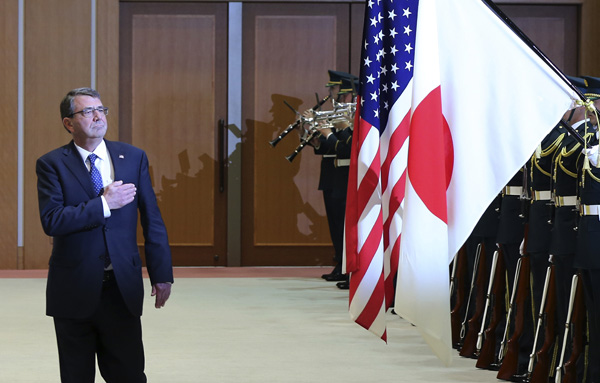 There will be no discussion on the deployment of the Terminal High Altitude Area Defense (Thaad) system during the new U.S. Defense Secretary’s talks with his Korean counterpart, according to a South Korean defense official.

U.S. Secretary of Defense Ashton Carter arrives in Korea today for a three-day visit, in his first trip to the region since succeeding former Pentagon chief Chuck Hagel in February.

Carter will hold talks with Defense Minister Han Min-koo on issues like bolstering joint deterrence against the North’s nuclear and missile threat.

There was speculation over whether Carter’s visit to Seoul would finally bring about official discussion on the placement of the U.S.-led anti-ballistic missile system on the Peninsula.

“This is Defense Secretary Carter’s first visit to Korea and an opportunity to reconfirm the United States’ firm security commitment and convey a message of maintaining peace and security on the Korean Peninsula,” the defense official said.

The placement of the Thaad in the U.S. Forces Korea will not be discussed, the official added.

However, in addition to coordinating policy on North Korea, the two defense leaders will assess security on the Korean Peninsula as well as the smooth transfer of wartime operational control (Opcon) to South Korea.

The Thaad system is intended to defend South Korea from possible nuclear and missile threats by North Korea and deter them. It is designed to shoot down missiles closer to their point of origin than South Korea’s current missile defense.

Washington and Seoul claim there have been no official talks on its deployment in Korea.

The placement of a Thaad battery in Korea has been controversial, as it comes with a radar system that can reach more than 1,000 kilometers (621 miles). China and Russia have both vocally opposed the deployment of the advanced missile defense system in Korea, fearing it may lead to instability in the region.

In an interview with the Japanese daily Yomiuri Shimbun, Carter urged trilateral cooperation among Korea, Japan and the United States, and the importance of looking to the future, an issue he said he would discuss with officials from both allied nations.

“The United States appreciates the historical sensitivities in this relationship,” Carter said, “but we believe the potential gains of cooperation - the opportunities that exist for both our two long-time allies, and the entire region - outweigh yesterday’s tensions and today’s politics.”

His trip to Japan and South Korea will also focus on a trilateral data information initiative.

Last year, the three countries signed a trilateral pact agreeing to share military intelligence on North Korea to bolster their defense posture. Because of tense diplomatic relations between Japan and South Korea, Washington is expected to act as an intermediary.