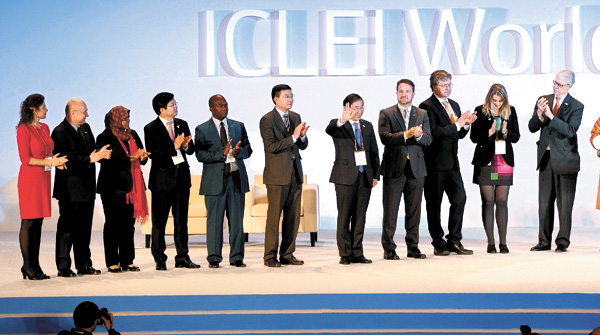 Seoul Mayor Park Won-soon, center, waves Wednesday at the opening ceremony of the International Council for Local Environmental Initiatives (ICLEI) World Congress 2015 held at the Dongdaemun Design Plaza in central Seoul. Park has become the incoming president of the ICLEI Global Executive Committee 2015-2018. The triennial congress, the largest ever, is being held through Sunday in Seoul.[NEWSIS]

Seoul is hosting the largest-ever congress of the International Council for Local Environmental Initiatives (ICLEI), a global association of local governments and organizations that have made a commitment to sustainable development, through Sunday.

The ICLEI World Congress 2015, which began its five-day schedule on Wednesday at Dongdaemun Design Plaza (DDP) in central Seoul, is being attended by about 1,550 participants including 227 mayors and elected leaders of 251 local governments around the world. Also, 87 percent of the council members are present.

Sessions will be dedicated to environmental issues under the general theme of “Sustainable Solutions for an Urban Future” and be held at both the DDP and Seoul City Hall in central Seoul. Eight major themes make up the agenda including the sustainable city, resilient city, biodiverse city, low-carbon city, resource-efficient city, smart urban infrastructure, green urban city and health and happy community.

The council was established in 1990 when representatives of more than 200 local governments from 43 countries gathered at the World Congress of Local Governments for a Sustainable Future at the United Nations in New York. The Seoul Metropolitan Government has been a member since 1999 and opened the ICLEI East Asia Headquarters in 2012. Currently, 52 local governments in South Korea have joined the ICLEI.

The congress is being held in Asia for the first time in 20 years. Saitama, Japan, played host in 1995.

The five-day congress kicked off with an opening ceremony at the DDP on Wednesday afternoon. Seoul Mayor Park Won-soon, who will be serving as the president of the council from 2015, was the first speaker.

“Seoul, with its 10 million people, has some dark aspects of economic development such as pollution, but it’s become a city that is putting effort into improving its environment,” Park said in his opening speech. “I’d like to share the process of working together with people for the sustainability of the city.

“I hope this congress that lasts five days, or 120 hours, becomes an opportunity for us to find solutions that will possibly be reflected in international organizations’ policies, and the members and the residents of their cities will benefit from it,” Park added.

David Cadman, the outgoing ICLEI president who served since 2006, gave a speech stressing the role of Asia in climate change.

“We need to work with them to make sure that there is a positive future,” he continued. “We know we can do it. We know their ways will make our cities more sustainable and resilient.”

During the ceremony, there was also the inauguration of the ICLEI Global Executive Committee 2015-2018 headed by incoming president Park. Suwon Mayor Yeom Tae-yeong became a member of the committee.

That was followed by speeches by leaders of international organizations on climate change, including a video message from Great Britain’s Prince Charles suggesting environmental solutions and reaffirming the aims and aspirations of the congress.

One of the main events of the ICLEI World Congress 2015 is the adoption of a so-called Seoul Declaration today, which will underline priorities for sustainable urban development to be adopted by local and regional government leaders in the future.

The ICLEI explained that the declaration will be presented as a pivotal complement to ICLEI’s Strategic Plan 2015-2021, a six-year plan to be completed at the congress.

The council also said in a statement that the declaration will be taken as a strong signal of commitment by citizens, civil society participants, and nongovernmental organizations, and it will also inform global processes such as the UN Framework Convention on Climate Change negotiations, the Sustainable Development Goal negotiations and the UN Conference on Housing Sustainable Urban Development.

“The plan is meaningful in that its promotion was led by citizens to prevent climate change,” said Kang Pil-yeong, head of the city government’s Environment Policy Division. “The Seoul city government will also try to keep its promise to people and businesses to bequeath a beautiful and healthy environment to our decedents.”

The municipal government plans to reduce 10 million tons of carbon dioxide emissions by 2020 compared to 2005, which is about 25 percent, and 20 million tons by 2030.

Mayor Park is going to introduce the plan on Sunday to the leaders gathered at the ICLEI World Congress.

The World Congress is accompanied by exhibitions held from Wednesday to Saturday at the DDP and Seoul Square in front of Seoul City Hall, which are open to all who are interested.

The exhibitions at the DDP’s Art Hall 2 are divided into several categories. The Climate Change Pavilion provides an opportunity for visitors to understand more about climate change and the efforts by the international community to overcome these challenges, and the Seoul city government also shares its values and the goals of its best environmental practices to mitigate climate change.

At Seoul Plaza, about 60 environmental and civic organizations will run programs with tips people can use to help prevent climate change.