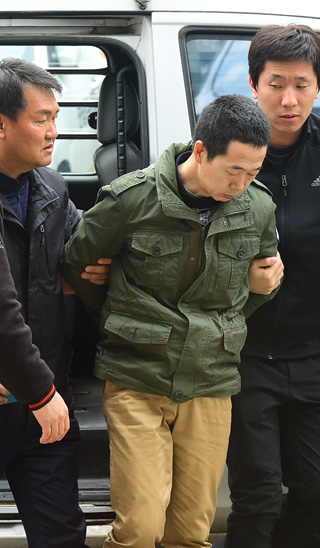 Police have arrested a key suspect in a case involving a series of discoveries of mutilated body parts found at the Sihwa Seawall in Siheung, Gyeonggi, as he was attempting to discard what is presumed to be the victim’s arms and legs.

Authorities identified the suspect on Wednesday as a 47-year-old Korean-Chinese man, who the Siheung Police Precinct believes was married to the deceased.

A police investigation into the case launched Sunday, after authorities discovered a presumably female torso at the Sihwa Seawall.

The following day, they found a decapitated head just 3 kilometers away following reports from locals claiming to have seen an object that looked like a wig. That discovery came just a day before investigators found two mutilated hands and two feet in close proximity to where the other remains had been collected.

The precinct announced Wednesday that officers had arrested Kim Ha-il in Siheung earlier in the day as he tried to discard the victim’s two arms and two legs, which so far remained unaccounted for.

Police added that the man - whose name was disclosed because he is a key suspect in a major crime - had confessed to the killing as he was being escorted to the precinct.

“I accidentally committed the crime after having a fight with my wife,” Kim told reporters as he entered the police station.

Though the man has claimed to be the victim’s husband, authorities have not yet confirmed it.

“Kim is reported to be the victim’s husband, but we haven’t confirmed it from related authorities,” a police officer said. “We’re planning to request a detention warrant for him after questioning.”

Police were able to identify the victim, a 42-year-old Korean-Chinese woman surnamed Han, with fingerprints taken from the hands and feet found Tuesday. Authorities believe Kim was trying to dump the rest of Han’s remains while on his way to work in the morning and are currently questioning him over the details.

The case follows two other brutal mutilations that were found or believed to have been committed by Korean-Chinese residents in Korea, incidents that stirred negative public opinion against that demographic.

In November, Park Chun-bong, a 55-year-old ethnic Korean with Chinese nationality, was alleged to have killed a woman with whom he lived and rented a studio and subsequently mutilated her body.

He is believed to have discarded the body parts at four different locations in Suwon, Gyeonggi. The case currently remains under investigation by prosecutors.

Similarly, in April 2012, Oh Won-chun, 42 years old at the time, was found to have abducted a woman and taken her to his home to murder her and chop her body into hundreds of pieces. He was convicted in January 2013 and handed a life sentence by the Supreme Court.

The case also raised acute criticism against the police, however, who many believe improperly investigated the case after the victim had called authorities for help.