Getting healthy an elusive goal for striker

Getting healthy an elusive goal for striker 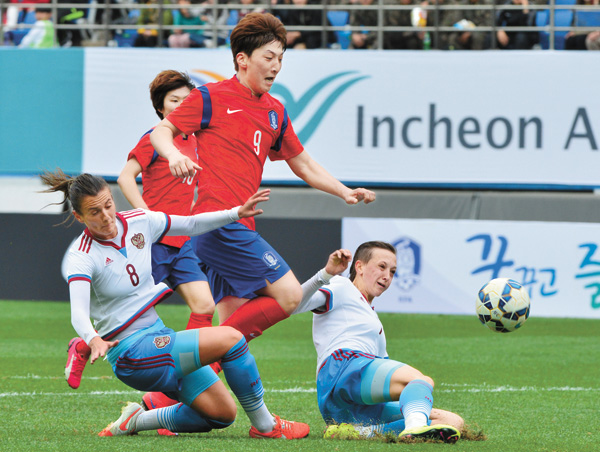 The Swedish football star is well known for physically dominating defenders and scoring acrobatic goals, and Park has been trying to emulate his style.

At 182 centimers (6 feet), the 28-year-old is the tallest national team attacker.

She was the top scorer in the AFC Women’s Asian Cup with six goals in five matches. In her national team career, Park has 18 goals in 32 matches.

After netting 19 goals in 22 matches in the WK League in 2013, Park moved to Russia’s WFC Rossiyanka, where she started to have difficulties just as the Korean national team needed her.

Park didn’t play in the Incheon Asian Games last year due to issues with her football club, and South Korea had a hard time offensively and collected a bronze medal after losing to North Korea on its home soil.

The Busan-born striker joined the national team for the Cyprus Cup last month, but she spent most of her time on the bench with an ankle injury. Korea finished 11th among the 12 teams at the event.

For the two friendly matches against Russia, Park was on the roster, but still was not 100 percent fit. In addition, she again injured her ankle in training.

Now, with 2015 FIFA Women’s World Cup in Canada just two months away, Park’s condition is a critical issue for Korea, but she is slowly getting healthy again.

Wednesday’s friendly in Daejeon, which Korea won, 2-0, was the first time the Park-Ji offensive configuration was shown in Korea. They previously played together only at international events on foreign soil.

Furthermore, the two players stepped on the same pitch against Italy in the Cyprus Cup last month. But because Park was removed early in the second half due to injury, they haven’t had much time to become familiar with each other’s style of play.

In Wednesday’s match against Russia, Park still didn’t look to be 100 percent, but she was focusing on meshing with teammates during her 80 minutes on the pitch.

Afterward, the former Seoul City Hall player said she is finding her rhythm and trying to build stamina.

“It was a fun match, as I was able to click well with my teammates,” she said. “So-yun and other players talked to me a lot, both on and off the pitch, so we are getting more organized.”

Despite the victory on Wednesday, Park and Ji produced no serious threats. However, coach Yoon believes that when the two players, especially Park, are able to play at full tilt, they will be an intriguing combination.

“Park isn’t in full-game condition and I realized she should enhance her stamina through training,” Yoon said after the match. “The combination with Ji was not bad. Although neither was in good condition, I thank them for trying to show their best until the end.”

Football pundits say Park and Ji are a “big and small” combination in which the taller Park fights with defenders up front, while 161-centimeter Ji - nicknamed “Ji-Messi” for smart and slick plays like Argentine superstar Lionel Messi - penetrates into empty spaces and executes accurate passes.

As Park worked to improve her conditioning, Ji scored in each friendly against Russia. The 24-year-old national team career scoring leader has 38 goals in 74 matches.

“We need to reduce passing mistakes, and I noticed that we also need to improve accuracy and stamina,” said Ji. “In the World Cup, mental toughness also will be needed.”

Park agrees Korea should be better prepared before heading to the World Cup and emphasized staying confident. Korea is in Group E with Brazil, Spain and Costa Rica.

“Not all players in other countries have better physiques than us,” she said. “I think we just have to prepare thoroughly.”

Meanwhile, the team will gather at the National Football Center in Paju, Gyeonggi, on May 8 for training and then go to the United States for a friendly on May 20 before heading to Montreal on June 4.

Korea will play Brazil on June 10, followed by Costa Rica on June 14 and Spain on June 18.