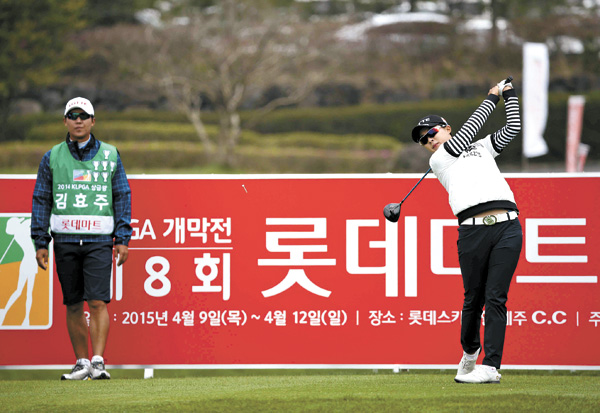 Kim Hyo-joo tees off on the first hole Thursday at the Lotte Mart Women’s Open at Lotte Sky Hill Country Club in Seogwipo, Jeju. The 19-year-old finished the first round at 2-under 70, tied for 13th. Provided by the KLPGA

While Korean ladies have been a strong presence overseas, it’s time for golf fans to turn their attention back home as the 2015 Korean Ladies Professional Golf Association (KLPGA) Tour returned Thursday with the Lotte Mart Women’s Open at Lotte Sky Hill Country Club in Seogwipo, Jeju.

Technically, the KLPGA Tour began in December with the Hyundai China Ladies Open in Shenzhen.

Because the event was outside Korea, the Lotte Mart Women’s Open is considered the KLPGA’s de facto opener.

For eight years, the tournament has been one of the most important events for local golfers as the winner qualifies for the Lotte LPGA Championship in Hawaii next year.

All eyes are on “Super Rookie” Kim Hyo-joo, who collected her first LPGA win at the JTBC Founders Cup last month and the Hyundai China Ladies Open in December.

The KLPGA last year was dominated by Kim, who is sponsored by Lotte Group. The 19-year-old won five tournaments and was No. 1 in prize money. She capped her year by winning the MVP award.

“I felt really good in the past few tournaments, so I want to maintain that momentum for a good result in the tournament hosted by my sponsor,” she said. “I don’t want to miss any opportunities.”

Kim won the Lotte Mart Women’s Open as an amateur in 2012.

After finishing tied for 11th at the LPGA’s ANA Inspiration last weekend, the Evian Championship winner returned to Korea on Tuesday and skipped the practice round on Wednesday to rest.

In the first round Thursday, Kim tied for 13th with five others at 2-under 70, three strokes behind leaders Kim Hyun-soo and Cho Yoon-ji.

The KLPGA is looking for a new star this season, as half of last year’s top 10 money winners have left Korea. Along with Kim, last year’s KLPGA Rookie of the Year Baek Kyu-jung, Jang Ha-na and Kim Sei-young are playing on the LPGA Tour, while two-time KLPGA prize money leader Kim Ha-neul left to play in Japan.

Golf pundits predict Heo Yoon-kyung, Lee Jung-min and Chun In-gee will be the “big 3” players this season. They were second, third and fourth in winnings last year.

Chun got a taste of the LPGA Tour the past three weeks. As an invitational player, the 20-year-old tied for 37th at the JTBC Founders Cup, finished 50th at the KIA Classic and shared 41st place at the ANA Inspiration.

Other names to watch are KLPGA Tour sophomores Kim Min-sun and Ko Jin-young, who each had a victory last year.

Park Gyeol and Ji Han-sol are expected to challenge for Rookie of the Year honors.

The 19-year-old Park won the gold medal in the Asian Games last year and finished first in the KLPGA Tour seed tournament. The 19-year-old Ji had eight amateur wins before turning professional.