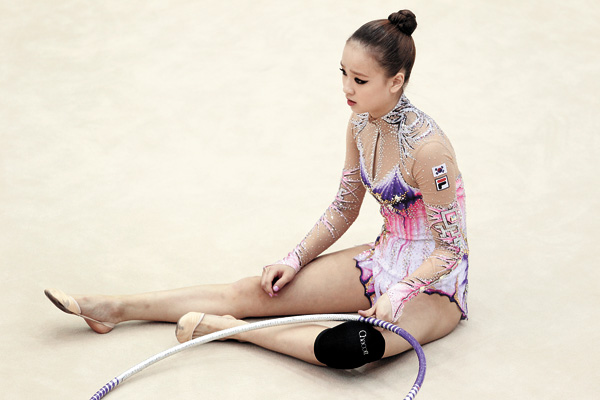 With the Summer Games in Rio de Janeiro about a year away, the injury of rhythmic gymnast Son Yeon-jae is worrying the local gymnastics community.

Son had to withdraw from the International Gymnastics Federation (FIG) World Cup in Romania on Sunday after hurting her ankle during her hoops performance. Although the 20-year-old was able to finish her showing, she dropped out of the ball, clubs and ribbon events.

Her agency IB Worldwide said that her injury isn’t severe and that she will be able to compete in the upcoming national team selection trial.

Since making her senior-level debut in 2010, Son has been improving year after year.

The Yonsei University student finished fifth in the 2012 London Olympics and then settled for fourth in the World Championships last September. In the Asian Games last year, she delivered the gold medal for the first time in Korean rhythmic gymnastics history, and she hopes to get a medal in the 2016 Olympics in Rio de Janeiro.

But some experts are worried that she may already be past her prime.

Son will be 22 when the quadrennial event opens, which is generally considered past the retirement age for rhythmic gymnasts.

Since rhythmic gymnasts perform for just one minute and 30 seconds, many people might think that the sport is not physically challenging. But experts say that the intensity of the training is higher than any other sport.

While most athletes reach their peak performance in their mid-20s, rhythmic gymnasts usually peak before the age of 20.

“In Russia and other Eastern European nations, there are cases in which rhythmic gymnasts perform until their mid-20s,” said Park Sae-jong, a researcher at Korea Institute of Sports Science. “However, Korean athletes generally peak in their late teens and retire in their early 20s due to their low stamina.”

Experts are already worried about Son’s ability to maintain her stamina. Last month, she competed the season’s first World Cup in Lisbon and showed a powerful performance in her first hoop event, but as she went on to ball, clubs and ribbon, she began to look tired.

Her Russian rivals in the Olympics will be much younger than her. Yana Kudryavtseva, Margarita Mamun and Alexandra Soldatova are all younger than Son, and they have been cruising in recent World Cup events.

Experts say that this Russian trios lack the delicate expression of Son, but have better agility and more power. In order to compete at their level, Son must first properly maintain her weight.

“Losing weight right before the competition would be the worst move,” said Cha Sang-eun, deputy chief of the technical committee at Korea Gymnastics Association. “In order to compete in all four events, you need good stamina and to do so, she should maintain her weight and gain about 0.5 kilograms [1 pound] right before the completion.”