Agency profiles tax dodgers and how they do it

Agency profiles tax dodgers and how they do it 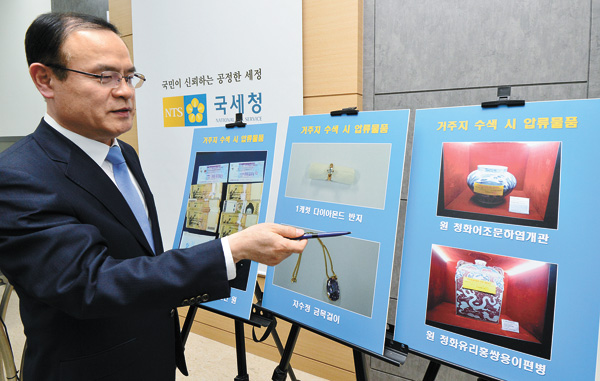 Shim Dal-hoon, head of the National Tax Service’s collection and legal affairs department, shows some of the expensive items, including antique vases and even hordes of cash, confiscated from the residences of high-profile tax evaders. The presentation took place Thursday at the government complex in Sejeong. [NEWSIS]

In early April, a housemaid rushed out into the street from a luxury apartment in Seocho-dong, southern Seoul. A group of officials from the National Tax Service (NTS), who had been on a stakeout for days in front of the apartment, caught her.

NTS officials then raided the house and found a bundle of 50,000-won notes totaling about 40 million won in a closet.

The owner of the house, identified only as “A” by the tax agency, owns a building in the Gangnam Station area. He had been pursued by tax authority officials for months for failing to pay 3 billion won in taxes on rental income from tenants last year. He enlisted his maid to help break through the stakeout.

According to the NTS on Thursday, there were 490 tax dodgers who enjoy luxurious lifestyles in pricey mansions as of last year.

It became easier for tax dodgers, who usually make money by renting out properties to avoid taxes, after the appearance of the 50,000 won note. They hoard the paper money at home or send the cash to other countries.

The tax authority collected about 1.4 trillion won by catching some of them last year.

According to NTS data, of the 1.4 trillion won the tax agency collected last year, 727.6 billion won was in cash.

The NTS found many of the tax dodgers established corporations in order to avoid paying. They purchase a building and register a company name with the appropriate authorities based on money they rake in by investing in real estate or stocks. The reason they set up a company is that they can legitimize expenditures as costs for running the “business.” They treat personal spending on golfing and family travel as corporate expenses, the tax authority found.

Some of them even hide rental income in order to avoid taxes permanently.

“It is difficult to track rental income because it is transacted between landlords and tenants in whatever ways they want, unless they report the contract,” said Lee Sang-woo, a director at NTS.

Some others were found with pricey artwork and ceramics bought with money that was made by selling properties under the names of their wives with the intention of not paying capital gains tax.

One of them caught by the NTS, named “B,” didn’t pay 1.1 billion won in capital gains tax after selling land in Namyangju, Gyeonggi, in 2013. The tax authority seized 12 ceramic pieces made during the Yuan Dynasty with a total estimated value of 6 billion won. It is currently assessing their authenticity and determining the value of the pieces.

Another tax dodger, named “C,” was found to be accumulating assets in an account under his wife’s name. He made money by acquiring ships and selling them back under the name of a paper company established in a tax haven country. He is living in an expensive apartment bought using the company’s name.

A former chairman of a midsize construction company reported his properties to the tax authority, but didn’t pay a significant portion of his tax, the NTS found. He currently lives in a luxury mansion in Seocho-dong and has a membership at a hotel sports center. The NTS got information that the ex-chairman bought a piece of expensive art last year and tracked the purchase channel.

The NTS has been tracking down such tax dodgers since September 2013. As many as 121 officials at the property tracking department of the tax agency have been put on the assignment. The agency has filed 359 civil lawsuits to collect the unpaid taxes. Nonetheless, the amount of taxes being dodged doesn’t seem to decreasing.

Dodgers have been found living lives of luxury, while not paying their taxes.

As many as 38 tax dodgers were found living in expensive mansions or apartments.

Thirty of the 490 tax evaders have been staying overseas for long periods, while 101 of them enter and leave the country too frequently.

Many of them also were enjoying superfluous spending.

“The NTS will not allow tax evaders with ill intentions, who live in luxury, to be engaged in economic and social activities,” the agency said in a statement. “The 490 tax dodgers on the current list will be closely watched.”

The tax agency has enhanced punishment for tax evasion significantly at a time when government coffers are short of national taxes due to the sluggish economy.

Tax revenue last year was nearly 11 trillion won short of expectations, largely due to worsened corporate profitability because of the global slowdown and a prolonged slump in domestic consumption.

According to data by the Ministry of Strategy and Finance released in February, tax revenue collected in 2014 totaled 205.5 trillion won, 10.9 trillion won short of the government’s target of 216.5 trillion won. The government has been collecting less tax than expected for the past three years.

Names of habitual tax evaders will be disclosed and they will be prohibited from leaving the country, the NTS said.

Under the U.S. Foreign Account Tax Compliance Act of 2014, starting in September the NTS will begin exchanging information on financial accounts of Koreans residing or working in the United States who earn more than $10 in interest annually.

Those who report dodgers to the tax agency will be eligible to receive as much as 2 billion won in rewards, the agency said, asking for support from the general public.