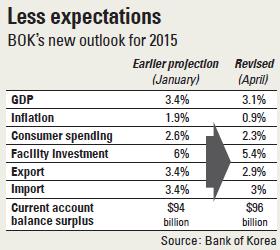 The Korean central bank finally accepted that the country is faced with low inflation and readjusted its outlook for consumer price growth for this year to below 1 percent.

But the Bank of Korea continues to brush off claims that Korea is facing deflation and maintained an economic growth outlook of over 3 percent, although it was lowered from the previous estimate made in January.

On Thursday, the BOK readjusted its projection for this year’s inflation rate from the previous outlook of 1.9 percent in January to 0.9 percent. If so this would be the first time that the nation’s consumer price growth has fallen below 1 percent in 16 years.

The last time inflationary pressure was so low in 1999 when prices grew 0.8 percent.

The readjustment of the inflation rate came as a surprise to the market.

“The biggest change was to the 2015 CPI forecast, which was lowered by a full percentage point, to 0.9 percent, broadly in line with our own forecast of 0.8 percent,” said Mark Walton, BNP Paribas analyst in a statement released on Thursday.

“Although the BOK had already signaled that it would probably lower both its growth and inflation tracks, the extent of the inflation downgrade was a mild shock,” Walton added. “Historically the BOK has appeared reluctant to make dramatic changes to its forecasts, with the result that actual inflation has repeatedly undershot its expectation.”

The central bank also revised the economic growth outlook for this year from 3.4 percent to 3.1 percent. Although the outlook has been adjusted downward, the central bank governor remained optimistic about the possibility of a mild recovery starting in the second half.

“We have recalculated the growth in the fourth quarter of 2014 and it showed that it was actually much worse than what we had expected,” Gov. Lee Ju-yeol said at a press conference held on Thursday regarding the readjusted outlook. “The last three months in particular grew more slowly than the initial estimate of a 0.4 percent growth to 0.3 percent.

“We have also considered the inflation rate and the likely tax shortfall [for this year].”

However, Lee said the rate cuts made since the second half of last year will start having an effect.

“Although it is still below our expectations, a recovery is continuing,” the governor said. “And not only have we lowered the key interest rate three times, the government has taken several actions to boost the economy.”

In what it considers a preemptive measure against the economy further decelerating into a perpetual low-growth mode, the BOK has lowered the benchmark rate on three occasions: last August and October and March of this year. In each, the rate was cut 0.25 percentage points to finally bring it to a record low of 1.75 percent.

“When considering that incomes will improve thanks to low crude prices that have been going on for nine to 10 months since the second half of last year, we expect the economy will continue to be on the recovery track,” the governor added.

But markets remain doubtful and still fear deflation. Some financial companies think the economy will only grow in the 2 percent range.

“While the BOK appears to finally have come to terms with the extent of disinflation, Governor Lee’s comments suggest a still relatively upbeat view of domestic growth prospects,” BNP Paribas analyst Walton said. “By contrast, we see growth risk as being skewed toward disappointment, with additional easing still on the table.”

BNP Paribas projects 2.7 percent growth. Nomura Securities has a darker outlook of 2.5 percent. These are in stark contrast to the government’s outlook of 3.8 percent.

While consumer spending has been slowly recovering, it still hasn’t fully rebounded from the tragic sinking of the Sewol ferry a year ago. Even exports have seen growth slow on the back of the weaker euro and Japanese yen.

The biggest questions remains: Will the BOK make another rate cut in May?

The central bank’s monetary policy committee took a breather Thursday when it decided to keep the key interest rate at 1.75 percent for this month.

The rate freeze was expected. A survey by the Korea Financial Investment Association of 112 experts in 83 institutions showed that 96.4 percent projected the central bank would keep the rate at its current level for this month. Since the central bank readjusted the rate last month, which was a month earlier than what many in the market expected, experts were betting that the next cut would likely occur in May. They think the BOK will monitor the market and the economic situation in April before making its decision the following month.

But Lee seems to feel less pressure to make such a move, saying that the key interest rate of 1.75 percent is enough to contribute to economic recovery.

In fact, Lee took a hard stance and demanded that the central government now take responsibility for stimulating the economy.

“The tax shortfall in the last two consecutive years has contributed in lowering economic growth,” Lee said. “And this year, although it may not be the same as last year’s, we expect a certain shortfall.

“The conditions for a supplementary budget are extremely strict and it is difficult to ignore the nation’s fiscal soundness, yet to secure an economic recovery and potential growth, fiscal policy must take a certain role.”