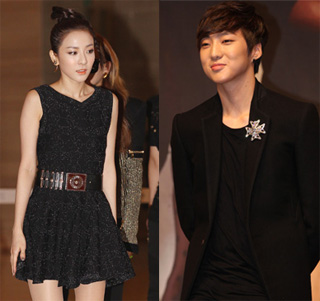 YG Entertainment’s Sandara Park, left, and Kang Seung-yoon, right, a member of the boy group Winner, are teaming up to play the lead characters in the upcoming web drama, “We Broke Up.”

Park is also known as Dara, from the girl group of 2NE1.

The web drama is based on a popular web cartoon series that portrays a college campus couple who break up but are forced to live under the same roof.

In the drama, Dara will play a competent young woman who always has a bright personality despite the hardships she goes through.

On the other hand, Kang is portrayed as a passionate vocalist in an indie band who seeks employment and willingly works as a part-timer throughout the nights.

Sandara has been building her acting career by participating in movies and dramas.

Her most recent performance was in web drama series “Dr. Ian.”

Kang has also showed his acting abilities in the sitcom series “High Kick: Revenge of the Short Legged” (2011-12).

Along with Sandara and Kang, Kang Seung-hyun, a female fashion model, and Jang Gi-yong, a male model, will also be taking part in the upcoming online drama.

“We Broke Up” is co-directed by Kim Yong-wan, the director of the popular web drama “Love Cells” (2014), which accumulated 600 million views.