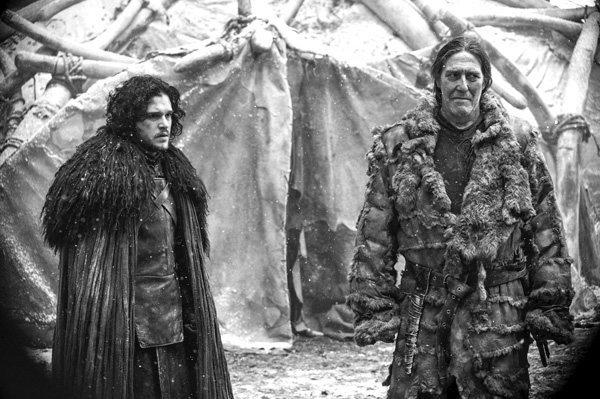 In this image released by HBO, Jon Snow, portrayed by Kit Harington, left, appears with Mance Rayder, portrayed by Ciaran Hinds in a scene from season 4 of “Game of Thrones.” The season 5 premiere airs on Sunday. [AP/NEWSIS]

“Quiet” and “still” aren’t words you might associate with “Game of Thrones.” HBO’s epic fantasy, set in the make-believe continent of Westeros, typically swirls with warring armies, forbidding landscapes, even fire-breathing dragons.

But Jon Snow embodies the meditative quality that regularly quells words and movement by the characters in favor of a moody immersion in this vast realm for the audience.

Through this universe roams Jon Snow, the illegitimate son of Lord Ned Stark and an outcast, a brooding warrior with haunted eyes, shaggy curls and a rosebud mouth from which few words issue.

That’s the way Kit Harington, who plays Jon, likes it, as “Thrones” begins its fifth season Sunday at 9 p.m. EDT on HBO.

“He’s not a complicated character,” says Harington, a compact but buff Brit of 28 whose earnest, subdued manner at an interview this week seems not so far removed from Jon’s.

But that, perhaps, is where the similarity ends.

“There’s a lot of turmoil, a lot of frustration and rage churning inside Jon - and that’s where he keeps it,” says Harington. “He doesn’t overthink what’s going on with him. He’s not a modern man. He’s not seeing a shrink.”

Jon Snow looms large in a crush of characters portrayed by an evolving ensemble of stars who also include Peter Dinklage, Lena Headey, Nikolaj Coster-Waldau and Emilia Clarke. And while the scale of the series is vast, so is the inspiration: the five-and-counting novels by George R.R. Martin in the “A Song of Ice and Fire” series.

Harington was signed for “Game of Thrones” at its pilot stage following his run in the West End production of the hit play “War Horse” - which he had landed soon after graduating from London’s Royal Central School of Speech and Drama. “Thrones” became his first television role.

“What I’ve always responded to when watching actors is their stillness. When they’re not making too many choices. When they’re concentrating on what’s going on up here” - he taps his temple - “rather than showing everybody what’s going on with gestures. I believe in stillness, and that’s how I like acting myself. Not doing too much.

“Maybe that’s what they wanted for Jon.”

Go figure: an action hero known for his stillness, and, by the way, an unwitting heartthrob. Welcome to Harington’s world.

But what is it he enjoys about this line of work?

“I keep asking myself that,” he laughs before hazarding an answer. “I like the moments: moments in a performance, moments of truth,” he says, declaring himself helpless to be any clearer. “The moments you find that no one else will ever know about - I like those best.”

Moments - another breed of moments that continue to surprise him - have compounded for Harington with his nearly instant stardom in a TV sensation.

“What’s that LIKE?” he says, echoing the interviewer’s question with a rare, broad grin. “I achieved it - or got given it - a YEAR out of drama school! It’s amazing, too big a thing to process.

“The part that feels real for me is doing the show! Walking onto set with CGI giants and talking about Valyrian steel - that’s the most real part of my life. This” - his arms sweep the Manhattan hotel lounge, including the reporter beside him - “is the unreal. My real life is more like fantasy than performing the actual fantasy.”

Shooting “Thrones” consumes roughly half of each year, and during his annual hiatus he has snagged other projects. One of them, his 2014 film “Testament of Youth,” will get its U.S. release in June.

“It’s a beautiful and harrowing true story of a young woman who lost all the men in her life in the First World War,” says Harington, who plays one of those men, starring alongside Alicia Vikander (“Anna Karenina”). “It’s a good, old-fashioned weepie, and I got to wear a wig and no beard, which was refreshing.”

But acting may not be forever, he cautions, “and I have to look ahead and figure what I want to do. I don’t sit back and think that I want to be an actor for life. It has to keep proving itself that it’s fulfilling me. Otherwise, why am I doing it?”

“Thrones” is renewed through at least a sixth season, which starts production in July, he says.

“But I can’t tell you whether I’ll go back to work in July,” he adds, acknowledging the ever-present threat that Jon Snow, like any “Thrones” character, won’t survive season 5. “Might, might not.”

Don’t expect spoilers from a man who knows a few things about quiet.