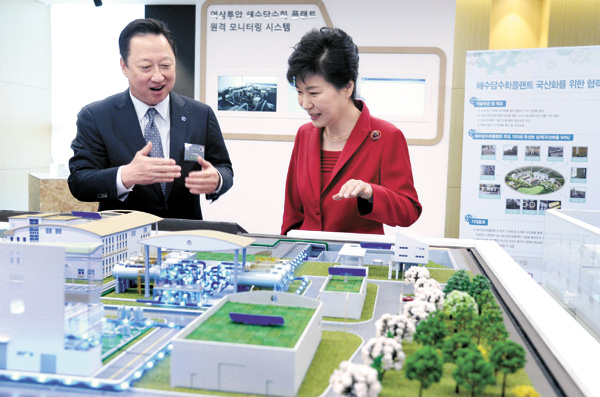 South Gyeongsang produces 30 percent of the country’s machines and parts. The province is home to production lines and R&D centers of Doosan affiliates, including Doosan Heavy Industries and Doosan Infracore.

Doosan and the government will cooperate on R&D projects that focus on converging ICT with existing machinery to accelerate development of smart factories in various industries.

Doosan and the government hope this will revitalize the Korean machinery industry, which has been hit hard by Chinese competitors with cheap prices and advanced technologies.

“South Gyeongsang has been central to Korea’s steel technologies since ancient times, and the nation’s modern economy was been built by the strong machinery industries in Changwon,” said Park. “Machine industries are in a time of technological transition, as ICT development has led to the pursuit of smart machines. I hope the Changwon center again will serve as a new paradigm for the Korean manufacturing industry.”

Doosan and the government established a 170 billion won fund to help finance 800 small machinery and parts manufacturers, and smart machinery start-ups in the province over next five years.

In another project, the company will build an artificial intelligence-enabled production machine with Changwon University and South Gyeongsang-based ICT start-ups.

The Changwon center will begin a drone development project in association with Korea Aerospace Industries (KAI) and 14 small technology companies in Changwon.

In addition, KAI will work with suppliers to produce parts for its flagship Surion helicopter.