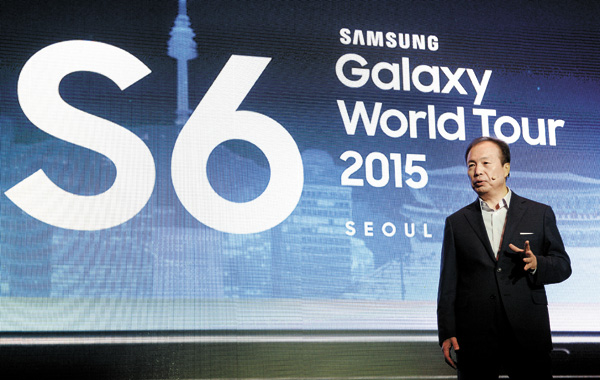 Shin Jong-kyun, CEO of the IT and Mobile Division at Samsung Electronics, holds a presentation at the Samsung Galaxy S6 World Tour 2015 at the Korean tech powerhouse’s headquarters in Gangnam, southern Seoul, on Thursday. [NEWSIS]

Samsung Electronics invited early adopters, technology bloggers and reporters to experience the much anticipated Galaxy S6 series on Thursday, a day before the Galaxy S6 and S6 Edge officially go on sale.

Held at the headquarters of the tech powerhouse, the Samsung Galaxy S6 World Tour 2015 was bustling with people as Samsung seeks to regain its dominance in the premium smartphone market with the latest model following the disappointing reception of the Galaxy S5.

Particular attention was paid to new features related to the phone’s camera, its payment system and battery performance with wireless charging.

Users can access the 16-megapixel main camera in less than a second by double tapping the home button. That feature will be attractive to anyone who has missed filming important moments as they opened their phones and searched for the camera icon. 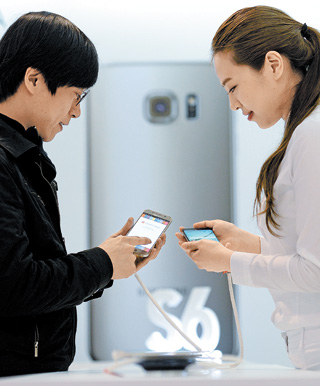 A visitor gets tips on the latest features of Samsung’s flagship smartphones at the World Tour event in Gangnam, southern Seoul, on Thursday. [NEWSIS]

“The home button function is designed to boost users’ chances to capture spontaneous moments,” said Park Joon-ho, head of the marketing division during a presentation session. “It works any time, even when the screen is off.”

Another handy shortcut includes tapping a sensor on the back to go directly to the selfie function.

A lot of attention was given to the Edge because of its unconventional display, which curves around the edges of the phone. The rounded sides not only have an aesthetic appeal but make users feel closer to texts and images on display.

The curved sides also contribute to functionality by allowing for quick access to customizable alerts and favorite contacts. The screen on the side can show e-mail, texts, missed calls and app activity.

The screen will light up with favorite contacts’ corresponding colors when they call.

The new materials used in the Galaxy S6 line exude a fresh feeling. Samsung has ditched its clunky plastic body and replaced it with a sleek glass back.

Another new feature is Samsung Pay. Despite a great deal of the buzz, little has been reported about how it actually works. A presenter from Samsung Electronics demonstrated the payment system. A user pays with the system by tapping twice: first to open Samsung Pay and then for a finger scan.

For the payment system to operate, a user needs to either input information about credit or debit cards manually or take pictures of the cards, which are then scanned for information. A finger scan is also required.

Samsung has plans to enter partnerships with 30 million companies to make its version of the wallet widely used. Samsung Pay will start operating in July.

Wireless charging also captured many visitors’ attention. For the round, wireless charger to work, the Galaxy S6 device needs to be placed very close to it. If the phone is more than 2 centimeters away, it will not charge.

It took about 170 minutes for the wireless charger to fully power up the flagship smartphones, a fairly long time compared with existing wired chargers.

Samsung Electronics predicted sales of the newest flagship smartphones will surpass those of the previous Galaxy phone. Shin Jong-kyun, CEO of the IT and Mobile Division, said that Galaxy S6 and Edge will sell more than any other models.