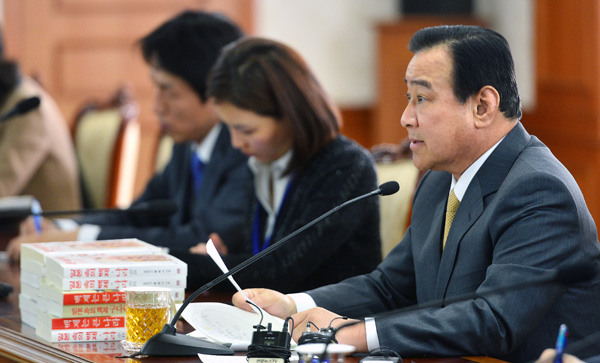 In a surprise press conference on Thursday in the Central Government Complex in Seoul, Prime Minister Lee Wan-koo, right, gives a warning to Japan for its persistent attempts to distort both nations’ shared history.[NEWSIS]

Korea on Thursday issued a stern warning to Japan in a surprise press conference arranged by the prime minister for its persistent attempts to distort both nations’ shared history.

In a meeting with reporters, Prime Minister Lee Wan-koo did not hesitate to directly condemn the Japanese government’s continued attempts to beautify its history.

“Tokyo must stop these groundless historical misstatements,” Lee said. “You cannot cover up the cold hard truth. You will eventually face the stern judgment of history.”

“Japan’s distortion of history is an attempt to deny the Korean people’s spirit,” he continued. “Under no circumstances can we allow history to be distorted.”

The prime minister’s remarks followed a news report on the Japanese government’s latest attempt to distort history between both countries. The JoongAng Ilbo reported earlier in the morning that Tokyo, following a series of moves to glorify its wartime past, had also attempted to distort ancient history.

According to the report, Japan’s Agency for Cultural Affairs used the theory of Imna Nihon-fu - or Mimana Nihon-fu, in Japanese - in posts on its Internet site.

The agency stated that eight out of the 23 relics from ancient Korea that Japan currently possesses are from the “Imna” period and omitted the explanation that they were excavated in Korea in Changnyeong, South Gyeongsang.

According to the Northeast Asian History Foundation, “the theory of the Imna Nihon-fu is an assertion by the Japanese that the Yamato government in Japan established a military outpost, the so-called Imna Nihon-fu, in [Korea’s ancient kingdom of] Gaya and ruled over Gaya from the end of the fourth century to 562.”

The assertion was used as one of the grounds to justify Japan’s 20th century occupation of Korea as its return to the lands they once controlled.

While the theory is rarely supported in academia, it has recently gained public attention. Most of the history textbooks for middle school students that gained Japanese government approval on April 6 promoted the theory. However, until now, the assertion was only used by a few right-wing pundits.

“We may cooperate with Japan in the future when it comes to security and the economy, but we have a two-track approach toward history,” Lee said.

He noted that Korea should invest more resources into strengthening historical research.

“I will order the Ministry of Education to secure more funding and manpower to research ancient historical relations between Korea and Japan,” he said.

Lee also made clear that his remarks were not a spontaneous, emotional reaction by stressing that he had consulted with Foreign Minister Yun Byung-se earlier in the morning. However, he said he had not consulted with the presidential office.

Relations between Korea and Japan have been soured for years in the aftermath of the Japanese government’s intensifying attempts to claim Dokdo and glorify its history, including its military aggressions against Korea.

Despite Seoul’s numerous demands for Tokyo to face its wartime past and offer an apology to its victims - particularly the women forcibly recruited to serve in wartime military brothels - the Shinzo Abe administration has insisted that the matter was already legally settled.

Meanwhile, a senior Korean official in Washington said that the vice foreign ministers of Korea, Japan and the United States would meet next week there to discuss efforts to address frozen ties between Korea and Japan.

According to the source, a key focus of the talks will be efforts to improve Korea-Japan relations.

“The United States is struggling because its room to maneuver has been largely diminished with relations between its two main allies having continuously been rocky,” the source said. “Washington strongly hopes for improved ties between Seoul and Tokyo, and it is seriously considering playing a role to facilitate a change.”