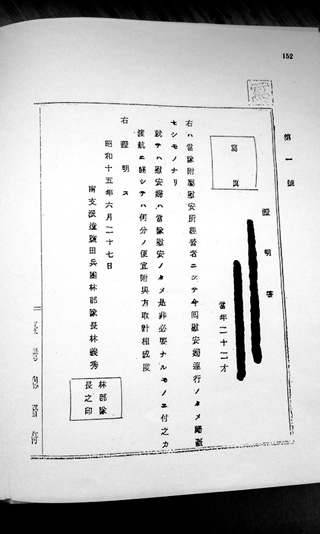 A certificate issued on June 27, 1940, by Imperial Japanese Army General Yoshihide Hayashi, to the administrator of his unit’s comfort station. Provided by Kim Moon-gil

A Japanese document describing how the country’s military hauled away women during World War II to serve as sex slaves - calling them “necessary” for its troops - was unveiled Wednesday by a Korean scholar.

Japanese Prime Minister Shinzo Abe has long denied that the young women, many of them Korean, were forcibly recruited into sexual slavery by the Japanese military.

Those tens of thousands of women are euphemistically referred to as “comfort women.”

On Wednesday, Kim Moon-gil, who heads the Busan-based Korea-Japan Culture Research Institute, revealed a collection of documents on the comfort women that was published by the Asian Women’s Fund in 1997 and stored in a municipal library in Japan.

The 600-page report includes 152 pages of a certificate issued on June 27, 1940, by Imperial Japanese Army General Yoshihide Hayashi, the commander of the Taiwan Army Research Section during the war, to the administrator of his unit’s comfort station.

The Asian Women’s Fund report describes it as having been “confirmed by the Foreign Ministry and the National Police Agency.”

A Japanese-led initiative launched in 1995 as an attempt to compensate the victims of wartime sexual slavery, was dissolved in 2007, leaving fundamental issues unresolved.

The certificate reads, “This person, as the manager of the unit’s comfort station, has returned from hauling comfort women.”

The same certificate directed to the administrator of the comfort station further states that “comfort women were necessary for the troops to ensure their needs” and to “make sure there is no difficulties in their passage across the sea.”

Kim said, “This material can counter the Japanese government’s denial that these women were forcibly mobilized, as the Japanese military itself directly uses the word ‘haul.’”

The document does not specify the nationalities of the women who were forced into Japan’s military brothels. However, Kim added that the certificate described the women as crossing the sea to China, “which makes it a high possibility that they were Korean.”

The name of the administrator referred to in the certificate and the location of the military brothels were erased, he continued, an indication that officials may have wanted to cover up the evidence.

The document comes amid Japanese media reports that Japanese textbook publisher Manabisha was pressured to remove some content regarding wartime sexual slavery from its publications to gain approval from the Abe government.

While this was the first time a reference to comfort women has been made in a middle school textbook since 2002, the final version deleted an illustration of a girl being dragged away by a Japanese soldier as well as a map of the country’s comfort stations.

Instead, it incorporated the Japanese government’s official stance that there “have so far been no confirmed documents to directly prove” the involvement of military or government personnel in the forcible taking away of comfort women.”

Since his first term as prime minister between 2006 and 2007, Abe has stated several times that there is “no evidence” that the Japanese Imperial Army coerced women to serve in military brothels.

On Wednesday, Korea’s Ministry of Gender Equality and Family and the Ministry of Education announced that it will provide materials on the Japanese military’s sexual transgressions during the war to elementary, middle and high school teachers this month.