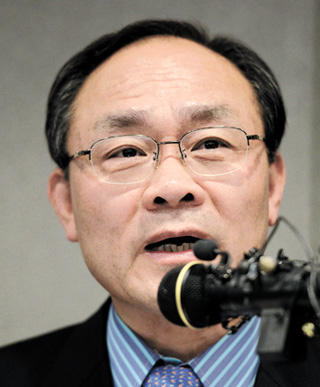 The former head of a construction company accused of milking the government of investment money was found dead on Mount Bukhan, his favorite hiking spot, on Thursday, the day he was supposed to appear in court at a hearing over a detention warrant requested by prosecutors.

Sung Wan-jong, who was chairman of Keangnam Enterprises until he resigned last month over the scandal, disappeared hours before the hearing and was later found hanging from a tree branch near an entrance to the mountain.

After Sung’s chauffeur and sons found a suicide note in his house, the police began searching for him.

“Sung’s body was found about 300 meters [980 feet] from the ticket office by a search and rescue dog at 3:22 p.m.,” an officer of the Seoul Metropolitan Police Agency said. “It was where Sung frequently went for a walk. He was hanging from a necktie tied to a branch two meters above the ground.”

Sung and Keangnam Enterprises are at the center of an investigation into alleged corruptions in the Lee Myung-bak government’s resources diplomacy, a signature initiative of the administration to secure natural resources for Korea through large investments overseas. Sung is a former lawmaker of the ruling Saenuri Party known to be close to former President Lee. He was also a member of Lee’s presidential transition committee in 2008.

Keangnam participated in consortiums that invested in Russia’s Kamchatka Peninsula and a nickel mining project in Madagascar.

Sung was being investigated for allegedly embezzling 25 billion won ($23 million) of financial support from the government for the investments through accounting fraud.

The prosecution requested an arrest warrant for him and the hearing was scheduled for 10:30 a.m. Thursday.

The police disclosed fragments of the suicide note Sung left in his house.

“I’m an innocent man who should be cleared from suspicions,” he wrote. “I will kill myself to prove it. Bury me next to my mother.”

After being alerted that Sung was missing, police analyzed CCTV footage and found that he left his house in Gangnam District, southeastern Seoul, at around 5:10 a.m. in a black quilted coat and black pants, and walked to a nearby hotel to hail a cab.

The police traced his two mobile phones and detected a signal in Pyeongchang-dong, Jongno District, in central Seoul at around 8:40 a.m., where an entrance to Mount Bukhan is located. The police dispatched about 1,300 policemen and soldiers and also helicopters to search for him.

At a press conference on Wednesday, Sung denied allegations of wrongdoing and even strong connections with the Lee government.

“I’m not an MB-man [someone close to former President Lee],” Sung said at the press conference. “How can a victim of the former government become an MB-man? I actually worked for President Park Geun-hye, who was running the Grand National Party’s primary [in 2007]. I helped the Lee government’s establishment, but they put my company in a debt workout program.”

“All procedures for the resources diplomacy went normally and transparently,” he continued. “I could not have appropriated the money because the governmental support was only given after we spent our money according to law.”

With Sung gone, the prosecution is expected to have difficulty pursuing its resources diplomacy case. Keangnam Enterprises was believed to have played a major role in the probe.