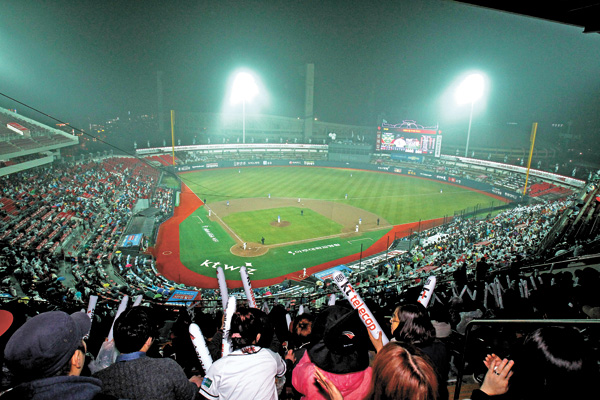 The 2015 baseball season started in late March. With new team KT Wiz now on board, baseball industry insiders expect 8 million people to visit stadiums this year. Viewers cheer during a game at Wiz Park, the home of KT Wiz, located in Suwon, Gyeonggi. By Lim Hyun-dong

Baseball stadiums are no longer merely places to watch sports.

These venues have become multipurpose spaces for eating, dancing and chanting, not just for viewing games - a transformation that has led to local stadiums attracting 6 million visitors in total every year.

The professional baseball season for 2015 kicked off on March 28, with throngs of people flocking to stadiums.

Visitors of various ages - from toddlers who accompany their parents to die-hard male baseball fans who tend to be in their 30s and 40s - are now being catered to at these venues.

But the most striking change in this year’s league is the addition of a new team, KT Wiz.

The number of games this year has increased from 576 to 720 because of the extra side, leading industry insiders to project that 8 million people will make their way to the nation’s stadiums this year.

Whether they know the rules of the field or not, visitors are sure to enjoy the Korean baseball experience because of the unique cheer culture it has.

“It seems like Koreans’ cheering culture often combines with entertainment,” said Kim Jong-mun, the director of the content department at NC Dinos, one of the nation’s 10 professional baseball teams.

“Because of this, people tend to think of watching baseball games as a kind of picnic,” he added. 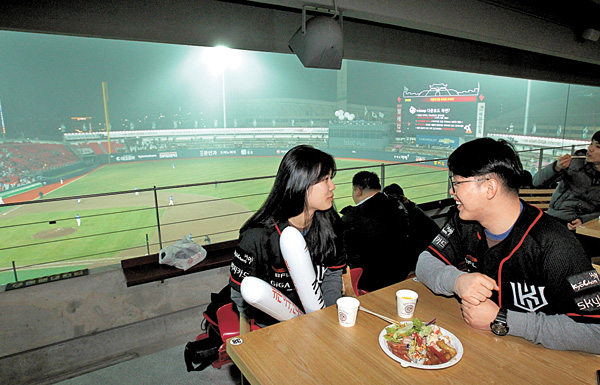 The Party Floor is located on the third floor of Wiz Park, home to the 10th professional baseball team, KT Wiz. People are able to watch baseball games and enjoy an all-you-can-eat dinner here. The area also has a dance floor. By Lim Hyun-dong

Since KT is the nation’s second-largest mobile carrier, the stadium is probably the most advanced in terms of IT.

For example, smartphone application called Wizzap facilitates a smoother experience at the complex.

People sitting inside certain zones at the stadium, such as BC Lounge Zone and M Mobile Zone, can order food through the app and get it delivered straight to their seats.

Visitors seated in ordinary zones can order dishes using the app and pick them up later at a kiosk.

While a majority of sports fans go to baseball stadiums to watch games, others jokingly say they visit just to gorge on food. 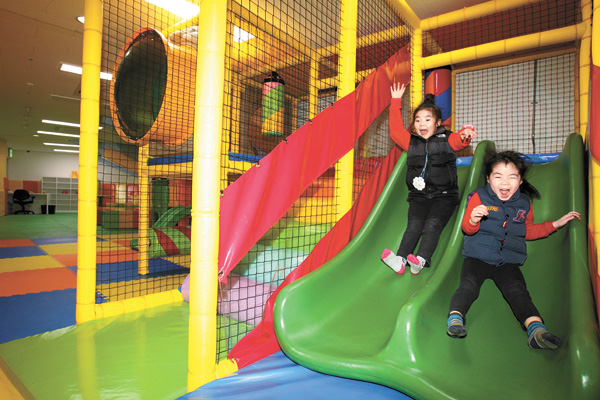 As KT Wiz is well aware of this, it has brought branches of some of the region’s famous eateries into the stadium.

Two of these are Jinmi Whole Chicken and Boyoung Dumpling, which have been operating in Suwon for the past three decades.

The original Jinmi Whole Chicken is located in Paldal District, Suwon, in an alley where deep-fried chicken restaurants are densely packed.

People queue up for at least 30 minutes during the week to buy a box of the restaurant’s chicken, which is well-known for its chewy texture and crispy skin as it is deep-fried inside huge iron pots.

Boyoung Dumpling became famous for its steamed dumplings, but only the pan-fried versions are available at Wiz Park. 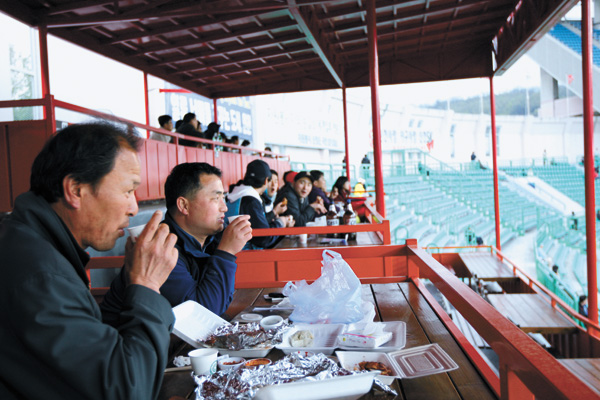 Notably, the eatery makes its own dough from scratch.

Tacos, burritos, hamburgers and gimbap (rice wrapped inside seaweed) are also available at the venue.

Just like other baseball stadiums, Wiz Park has special seats for those who prefer to watch the game in a more relaxed setting.

Hite Pub is the only drinking establishment in the nation with a view of a baseball field.

Although the bar is located in a separate two-story building right next to Wiz Park’s electronic scoreboard, it has an up-close view of the baseball stadium.

The pub, which accommodates up to 100 people at one time, has an indoor space on the first floor while the second floor is out in the open.

Admission for two people costs 90,000 won and includes entry to the game, along with two jugs of draft beer and sides such as deep-fried chicken and grilled sausages.

Party Floor on the third floor of Wiz Park is for people who feel like bouncing around while watching baseball. It has a dance floor just like one you would find in a club. 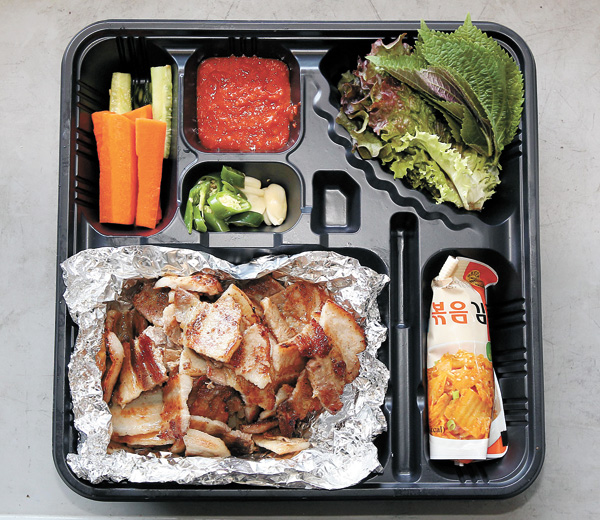 Tickets for two into this area cost 90,000 won and include an all-you-can-eat dinner.

Of all the 20,122 seats at the venue, special sections such as Hite Pub and Party Floor require reservations.

A room for nursing mothers and an indoor playground for toddlers are also available free-of-charge at the venue.

Parking spaces are limited, so making a reservation for a spot in advance is recommended by visiting the website ktwiz.co.kr or calling 1899-5916.


Catering to your needs

Since all baseball stadiums have different characteristics, it is always better to be informed about each one before visiting.

Incheon SK Happydream Stadium, formerly known as Incheon Munhak Stadium, is the most suitable destination for those who like to watch baseball picnic-style because a section of the stadium has stands covered in artificial turf.

This section is called the Green Zone and is located left of the outfield.

If you want to secure a good spot, get there early because the seats are not numbered and are first-come, first-serve.

People can bring their own picnic mats.

The stadium also has a barbecue area where people can grill pork belly while watching the game.

Admission into this section costs 80,000 won for four persons. Users are required to bring all the necessary equipment, including grills, cutlery and food.

For Koreans who love to enjoy grilled meat, other baseball stadiums without barbecue zones sell cooked pork belly in boxes.

A meal containing meat and vegetables is delivered to your seat when you pre-order it at a kiosk at Jamsil Baseball Stadium. Call (02) 2240-8874 for this option.

Entry is priced at 90,000 won for six persons for this area, which is perfect for partying. People are able to sit on benches, which look like suntan lounge chairs, or just sit on the wooden decks as they like. Call 1644-9112 for more information.

The latest trend in these sports venues are the so-called “exciting zones.” One is available at Daejeon Baseball Stadium.

Unlike almost all sports venues in which the audience looks down on the field, viewers who choose to sit here are able to watch the game from the perspective of the players. Stands in the zone are located at the same level as the baseball field.

On occasion, members of the audience are able to catch foul balls if they are lucky.

Updates for this year

Jamsil and Mokdong’s baseball stadiums renovated some of their worn-out stands before the new baseball season began.

The two are now equipped with power facilities that cannot be switched off because many previous baseball games were put on hold due to blackouts last year.

Some of the rules have changed for all games in the professional league, too.

The pitcher has to be replaced within 2 minutes and 30 seconds, not in 2 minutes and 45 seconds as before, and background music is played for just 10 seconds when a new hitter appears on the ground.

The hitter should reach the batter’s box before the music ends.

How to enjoy baseball to the full

There are plenty of smartphone apps that list the cheers for the country’s 10 professional baseball teams.

The apps provide songs for individual players, too, some of whom have up to three different cheers.

“On weekends, we run kids’ days or ladies’ days, giving discounts, and we’ve been giving lectures on baseball at colleges for women,” said Lee Hyung-geun, who promotes the LG Twins baseball team.

Almost all the stadiums have indoor playgrounds for children, too.

“I’ve been using [the Jamsil Baseball Stadium] since 2013, and I’m content with using the facility because I can watch games without being bothered by kids,” said Cho Gyeong-su, a father of three.