First half of 2015 is looking good for Kospi

First half of 2015 is looking good for Kospi 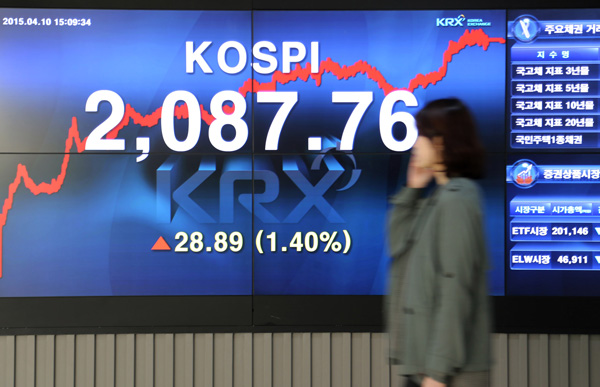 An electronic board shows the benchmark Kospi closing at 2,087.76, a high for the year, on Friday at Korea Exchange in Yeouido, western Seoul. [NEWSIS]

Seoul’s primary stock market, which has seen upbeat momentum recently, reached its highest level in more than three and a half years, largely thanks to high expectations of improved first quarter performances by Korean companies and continuing global liquidity.

The Kospi’s upswing has been accelerating recently. Since March 17, the market has remained above 2,000. But particularly this month, the market has been refreshing yearly highs almost daily. Except for two trading days, the Kospi has been moving upward. The same mood is also felt on the tech-heavy secondary market Kosdaq, which only saw the market retreat one day this month.

The momentum was further fueled by a Moody’s report released earlier in the day affirming Korea’s rating at Aa3 and offering a positive outlook.

This means that Korea’s credit rating could rise.

“Korea’s economy shows a demonstrated flexibility to bounce back from external shocks and has continued to grow relatively strongly, despite the effects of lackluster external demand on an economy highly dependent on exports.

“Although Korea’s trend GDP growth has slowed during the past decade, we forecast the economy will expand between 3 percent and 3.5 percent in the next two years, and near the higher end of that range through 2018,” Moody’s said in the report released Friday.

This was a stark contrast to concerns that had clouded the market. While the Bank of Korea remained optimistic that the economy seeing a mild recovery despite the fact that it lowered its outlook for this year from 3.4 percent to 3.1 percent, the fact that it also lowered the inflation rate forecast from 1.9 percent to 0.9 percent raised some alarms in the market. Many interpreted this as a possible admission of deflation. In fact, other financial institutions like BNP Paribas are less optimistic in projecting growth in the 2 percent range.

But in the first three months, things started to change. Especially since keeping money in a bank was unattractive after the BOK lowered the benchmark rate to 1.75 percent, retail investors have become more active.

In fact, their participation in the first quarter was 50 percent. This month it was further raised to 57.2 percent.

Some analysts are already projecting that this rally will continue through the first half.