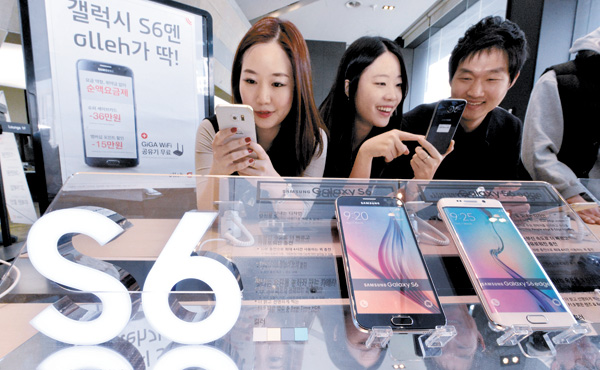 Those purchasing Samsung Electronics’ new flagship smartphones Galaxy S6 and S6 Edge may benefit from subsidies of up to 211,000 won ($193), as mobile carriers launched offline sales of the much-anticipated models on Friday.

The largest subsidy will come from KT.

The nation’s three mobile carriers - SK Telecom, KT and LG U+, in order of revenue and number of subscribers - unveiled the list of subsidies that vary according to the storage size and monthly plans users choose.

The more expensive the monthly plan, the bigger the subsidy size becomes.

But the subsidies have disappointed some prospective Galaxy purchasers, who were hoping for more discounts.

Buyers were hopeful after the country’s top telecom watchdog, the Korea Communications Commission, raised the ceiling for subsidies to 330,000 won on Wednesday, up from 300,000 won.

Individual stores may offer an additional subsidy equivalent to 15 percent of the carriers’ subsidy, capped at 49,500 won.

That means a 32-gigabyte Galaxy S6 could conceivably carry a price tag of under 600,000 won at some stores, after the two types of subsidies are applied.

But consumers were still disappointed by the final prices, which were kept high despite expectations.

Carriers do not need to arrange for hefty subsidies for smartphone models that are predictably popular - the Galaxy S6 series, for instance.

Based on the premise that a new subscriber opts for the highest-priced 76,000 won monthly plan and a two-year contract, SK Telecom will offer a 130,000 won subsidy for a 32GB S6, the smallest among the new Galaxy series, and 120,000 won for a 64GB model.

Although Samsung Electronics initially showcased a 128 GB model for both the S6 and S6 Edge, it won’t be immediately available in Korea due to a lack of demand.