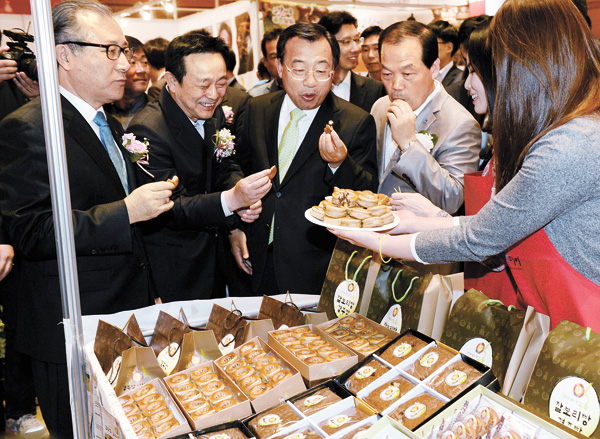 Shinsegae Group is looking to regional delicacies and desserts as a way to boost business at a time of stubbornly weak consumer demand.

Korea’s No. 2 retailer plans to expand its partnerships with popular regional food shops to more than just setting up stalls at selected branches. It wants to package and sell their products so consumers won’t have to travel to regional shops that can be far away. Instead, they will be able to pick up items at a nearby E-Mart, Shinsegae’s discount chain.

Under the direction of Chairman Chung Yong-jin, Shinsegae has set up a team to market delicacies whose taste and quality come as close as possible to the originals. The packaged delicacies will be sold under Shinsegae’s Peacock product line.

Products that become successful will be sold at the retailer’s first branch in Vietnam scheduled to open this month.

One beneficiary of Shingsegae’s plan is the owner of a doughnut shop.

“I was distraught when I ended up squandering 5.2 billion won ($4.8 million). But with the remaining 4 million won and hard work, my life has completely changed,” said Kim Dae-young, owner of Ugly Twisted Donuts in Cheonan, South Chungcheong. “Now I am dreaming of expanding my business overseas and collaborating with my franchises.”

In 2008, he started a fashion company with 5.2 billion won in seed money, some of which he borrowed from friends, but it went out of business a year later.

After working part time at a gas station, he managed to save 4 million won, and with this he decided to try again with Kkwabaegi, or twisted donut shop. Fortunately for Kim, it has been a huge success with 80 twisted donut shops at traditional markets across Korea generating 8 billion won in sales a year.

And thanks to Shinsegae Group’s program called the Best of Traditional Street Market Goods, customers overseas will have a chance to taste Kim’s doughnut.

A hundred popular street market snacks from across Korea were displayed Tuesday and Wednesday at the Best of Traditional Markets Fair at COEX in southeastern Seoul. The event was held by Shinsegae Group and the Small Enterprise and Market Service.

Last year, Peacock sold 1.5 billion won worth of Soonhee’s Pancake products, a popular stall at Gwangjang market. Shinsegae wants to start selling 20 street market products at its department stores and E-Marts by the end of the year, and it plans to expand sales internationally next year through its stores overseas. The retail giant will share profits with brand owners through royalty payments.

“We would like to establish a win-win relationship with our traditional market partners through this fair, said the Shinsegae president. “We will seek more successful traditional delicacy brands like Soonhee’s Pancake, and we aim to popularize traditional market delicacies on a more global scale.”

“Chairman Chung Yong-jin has decided the department stores and discount chain need foods that are good enough to die for,” said a Shinsegae official. “People line up to eat meatballs at Ikea and pizzas at Costco. We hope to see people in Vietnam and China doing the same for our street market snacks like pork leg and twisted donuts.”

“Traditional market delicacies draw a lot of customers, but there were challenges with standardizing cooking methods and getting government approval on sanitary standards,” said Chang Hye-jin, a senior manager at Shinsegae. “Thanks to our collaboration with the Small Enterprise and Market Service, we were able to find these great delicacies.”