Korea’s weatherman for all seasons

Korea’s weatherman for all seasons 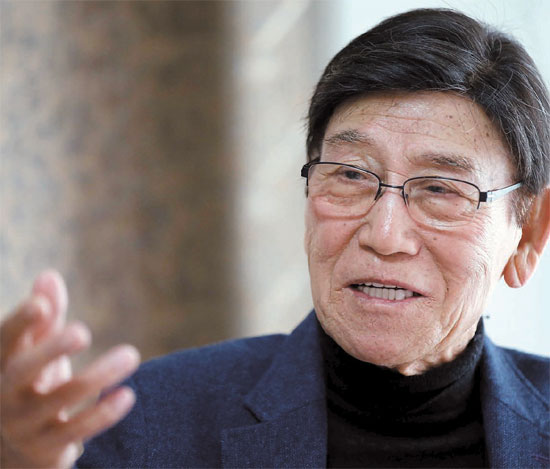 Contemporary weather reports come at the end of television news programs and pretty girls in short skirts explain the forecast by pointing at splendid computer graphics on a map.

But a half century ago, there was only one weather man.

Kim Dong-wan, 81, was Korea’s first weatherman. He explained weather conditions and made forecasts by drawing isobaric lines on paper maps with magic marker. Kim was the only professional weather guy and he dominated the broadcast market across radio and TV until he retired in the early 1990s. He worked for TBC, the original avatar of broadcast company JTBC, and MBC.

Now in his 80s, Kim has varicose veins in his legs and recently had extensive dental work. But he talked for two straight hours in an interview with the JoongAng Ilbo on April 1 at his house in Yangcheon District, western Seoul.

Kim’s wife recently broke her hip and is hospitalized. Kim is living by himself in a small apartment.

Throughout his weather forecasting career, Kim constantly visited real estate agencies in his neighborhood to learn proverbs and get ideas for witty expressions from daily conversations among seniors. He temporarily drove a taxi for a year, writing down funny things that his customers told him. Those funny anecdotes helped him in his career as a weather man.

Q. Many people still remember your name even two decades after your retirement.

A. I really appreciate how people still remember me. They must have forgotten some of the mistakes I made and only remember the things I got right!

How did you first start your broadcasting career?

Back in 1965, forecasters at the Central Meteorological Service, the predecessor of the Korea Meteorological Administration, started showing up at radio stations to deliver weather forecasts. I was one of the forecasters, and they tried to exclude me from the list just because I had a strong Gyeongsang accent. I’m from Gimcheon, North Gyeongsang.

At first, I didn’t even want to go on the air, but I changed my mind after realizing others thought I wasn’t eligible for the job. I suggested we record some weather reports, compare them, and pick the best person. My report was the best, so my career on the air began.

You spent more than three decades of your life reporting the weather. What was your recipe for success?

“I think it’s because I tried to add lively information into the weather forecasts. Also, I always tried to come up with witty expressions to make people feel better. For instance, people often use the expression, “steaming heat,” which is somewhat unpleasant. My version was, “This is heat in which even a fly feels drowsy.” People laughed at my sense of humor, and they felt better despite the same extreme weather.

You were the country’s top weatherman, and you had a second job driving a taxi?

Back in the day, the salary level for weather forecasters was low and we worked 24 hours and rested for the next 24 hours. I had time. When I collected all humorous memos I had made during a year driving the taxi, it was quite a lot, enough to fill a filing cabinet drawer.”

What do you think of today’s weather reports?

“Weather girls nowadays are too pretty. I think viewers can’t even remember tomorrow’s weather after watching the girls.”