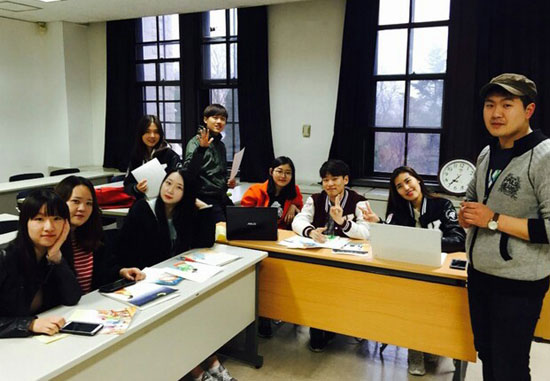 Students from the project Karandash help Goryeoin, or ethnic Koreans residing in Central Asia, discover their identity. Provided by Karandash

University students are looking for a way to help Goryeoin, or ethnic Koreans based in Central Asian countries, find their identity.

“When it comes to Goryeoin, people often recognize them as Koreans living in foreign countries,” said Lee Eun-chan, a member of Karandash. “But Korea does not pay much attention on them. We want to provide Goryeoin children and teenagers with an opportunity to find their identity and understand Korean culture.”

It has been 151 years since the first generation of Goryeoin emerged. But many of their offspring have lost their identities due to poverty and fewer opportunities to learn about Korea.

The history of the Goryeoin began in the 19th century. Poor peasants during the Joseon Dynasty (1392-1910) migrated to Siberia and the Maritime Province, the current Russian Far East territory.

Their number grew as many anti-Japan resistance activities were based in Russia during the Japanese occupation of Korea.

In 1937, the Soviet Union deported ethnic Koreans living in the eastern territory en masse to prevent Japanese spies from operating there. About 170,000 Koreans were forced to move to Central Asia at the time.

Now, about 500,000 Goryeoin, who are fourth, fifth and sixth generation immigrants, live around the world.

For the first project, Karandash selected six traditional stories: Heungbu and Nolbu; The Brother and Sister Who Become the Sun and the Moon; Gyonu and Jingnyo; the Grateful Magpies; the myth of Dangun; and Sim Cheong, the Devoted Daughter. All the books include Korean editions with illustrations from artists who donated their talents to the project. All six of the books have now been completed and the students are waiting for their official release.

It is not easy for students to publish books. From promotion to distribution, all members of the group took everything on by themselves.

The small idea has turned into a serious project. The students even met an official from Consulate General of Kazakhstan in Korea, one of the Central Asian countries where Goryeoin are residing.

The biggest issue in the project is cost. Karandash plans to distribute around 1,000 copies of the books by summer to organizations and institutes supporting Goryeoin in and out of Korea.

Their goal is to distribute around 200 copies to two domestic institutes in Ansan and Gwangju, and another 700 to organizations in Eastern European and Central Asian nations like Russia, Uzbekistan and Kazakhstan.

The students are currently reaching out to potential sponsors.

“Now we need more money to meet our goal,” said Jo Hyeon-su, another member of the club. “We are planning an online fundraising.”

Following this project, the students have many plans such as opening a Korean class and creating a mobile application for Korean fairy tales on behalf of the Goryeoin.