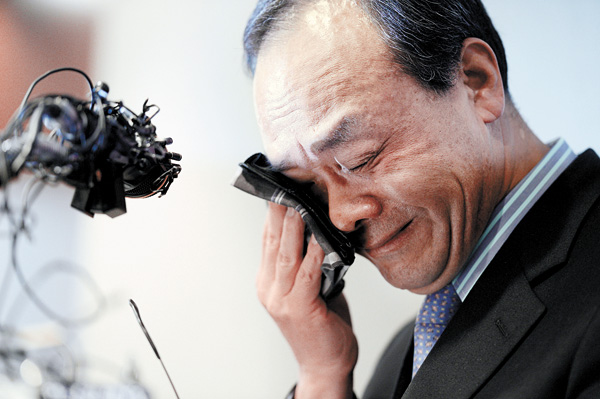 Sung Wan-jong, former head of Keangnam Enterprises, sheds tears at a press conference Wednesday, insisting he was innocent of corruption allegations, one day before he was found dead on Mount Bukhan on Thursday. [NEWSIS]

Top members of the Park Geun-hye administration, including the prime minister and presidential chief of staff, were sucked into a major graft scandal after a list of bribes allegedly paid by a businessman were found in his pocket after he committed suicide Thursday morning.

Their names were on it.

The prosecution said Friday it discovered a piece of paper that contained names of politicians and some won amounts next to them in the pants pocket of Sung Wan-jong, former chairman of Keangnam Enterprises, who was found dead Thursday hanging by a necktie from a tree branch at an entrance to Mount Bukhan. Sung, a construction tycoon and former lawmaker, was a prime target of an investigation into the overseas resources diplomacy project of the Lee Myung-bak administration.

Early on Friday, a local newspaper ran an exclusive interview with Sung conducted hours before his death. In it, he said he paid money to two associates of Park who went on to become her presidential chiefs of staff.

According to the prosecution, the paper found in Sung’s trouser pocket listed eight powerful politicians, dates and amounts of money. It included another Park associate currently serving as her chief of staff.

The memo also listed Lee Byung-kee and Lee Wan-koo without won figures or dates next to their names.

Almost all the politicians on the list are key associates of President Park and have served in top posts in her government. They all denied Friday they took money from Sung.

Lee Wan-koo is the prime minister and Lee Byung-kee is chief of staff in the Park Blue House. Huh and Kim are former chiefs of staff.

Yoo, the Incheon mayor, served as minister of security and public administration in the Park cabinet. Hong Joon-pyo is the South Gyeongsang governor. Hong Moon-jong is a senior lawmaker of the ruling Saenuri Party.

“We commissioned a handwriting analysis to verify if the memo actually was written by Sung,” a prosecution source said. “We will also ask Sung’s family and Keangnam Enterprises to provide relevant records.”

The prosecution’s announcement of the discovery of the list came only after a newspaper report that Sung had given money to Park’s two former chiefs of staff, Huh and Kim, years before she became president.

Friday morning, the Kyunghyang Shinmun printed an exclusive phone interview with Sung conducted hours before he was found dead. In the interview, Sung exposed details of his alleged payments to Huh and Kim. The newspaper also made public an audio file of 3 minutes and 50 seconds, an excerpt of its 50-minute-long conversation with Sung.

According to the report, Sung claimed that he had given $100,000 in greenbacks to Kim in September 2006 shortly before he accompanied Park on a trip to Germany. Sung said he handed over the money to Kim at the gym of the Lotte Hotel, noting that “Kim’s secretary also came at the time.”

Sung told the newspaper that when he was supporting Park’s failed presidential primary campaign in 2007, he gave 700 million won to Huh to help the campaign. Park ran against Lee Myung-bak in the primary for the Grand National Party, the predecessor of the ruling Saenuri Party, in 2007 but lost.

“Businessmen cannot ignore the requests of the people who will soon rise to the center of power,” Sung said in the interview. “So I helped a lot. I gave 700 million won in cash.”

“We met at the Riviera Hotel and I gave 700 million won over several occasions,” he said. “They financed the primary with the money, in fact.”

Sung said he did not offer the money but Huh demanded it. “The main [members] of that side all know,” he said. “That’s how I had become involved in the primary, but she lost.”

The Blue House and the ruling Saenuri Party were rocked by allegations that top figures in the Park government were paid by the businessman.

Asked about the Kyunghyang Shinmun interview, Blue House spokesman Min Kyung-wook said he had no information about it. He said the Blue House did not check with the officials mentioned in the report.

The prosecution’s investigation into Sung’s company and his bilking of government investments in Russia’s Kamchatka Peninsula and a nickel mining project in Madagascar was seen as an attempt to go after former President Lee, who promoted investments in overseas resources for Korea.

On Wednesday, Sung held a press conference to deny that he was a buddy of Lee and said that he was closer to the camp of Park, his successor.

Complaining that his company was ordered go into court receivership in 2009 under the Lee presidency, Sung said, “I cannot understand why a Park loyalist is now being labeled a Lee loyalist.”

Sung also claimed that he had put every ounce of his energy into Park’s presidential victory in 2012.

The businessman entered politics in 2012 by winning a National Assembly seat in his hometown of Taean and Seosan, South Chungcheong, on the ticket of the Advancement and Unification Party, a conservative party based in the province. It later merged with the Saenuri Party and Sung became a lawmaker of Park’s ruling party, but he lost his seat for election law violations last June.

Blue House Chief of Staff Lee Byung-kee said Friday afternoon that he had talked to Sung when he was alive and under investigation.

“Sung insisted that he was innocent, so I told him to go to the prosecution and submit to the probe,” Lee said. “I think he must have been disappointed.”

Through presidential spokesman Min, Lee also said Sung must have felt bitter that he refused to help him, and that was probably why his name appeared on the memo in Sung’s pocket.

Huh, former chief of staff at the Blue House, also issued a press release to deny Sung’s claim. “During the 2007 presidential primary, Park was extremely transparent about money, so such dealing is beyond our imagination,” Huh said. “Therefore, all the members of the campaign struggled with a tight budget, even spending their own money on expenses.”

Kim, who served as Park’s chief of staff from August 2013 to February 2015, also denied the graft accusation. “I have never received a single coin from Sung,” Kim said in a press release. “And yet, his malicious claim is being reported as if it was the truth and this must stop immediately.”

The Prime Minister’s Office also issued a statement to deny Lee Wan-koo’s connection to Sung. “Prime Minister Lee and Sung worked together for one year in the National Assembly, and there was no private relationship between them,” it said.

While the ruling Saenuri Party remained baffled, the main opposition New Politics Alliance for Democracy (NPAD) called Sung’s revelations “the worst corruption scandal in the history of Korean politics.” It demanded President Park take the matters into her own hands. “She must not forget that all the people mentioned are her closest confidantes,” said NPAD spokesman Kim Sung-soo.

The NPAD also expressed skepticism about the prosecution’s ability to investigate the powerful politicians named, including the prime minister and former and current presidential chiefs of staff.