When financial institution teams win, so do fans

When financial institution teams win, so do fans 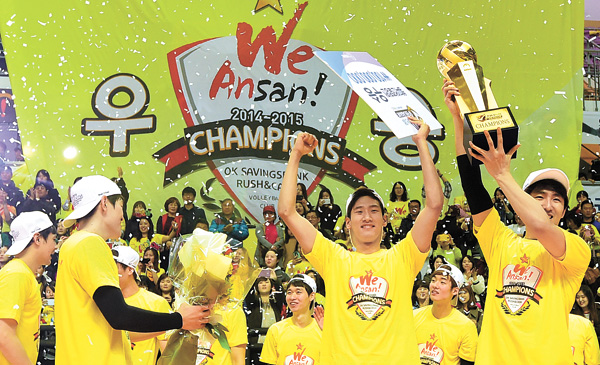 When Ansan OK Savings Bank Rush & Cash won the Korean professional volleyball league (V-League) championship against the Daejeon Samsung Fire Bluefangs on April 1, its fans cheered, and so did customers of the bank.

That’s because OK Savings Bank promised to give an extra interest 0.5 percentage point in interest to customers with a Spike OK installment savings deposit account if its volleyball club won the championship.

The base interest rate for the installment savings account was 3.8 percent, and the bank adds 0.6 percentage point for customers who present a Rush & Cash ticket stub when opening an account and 0.2 percentage point for doing it at OK Savings Bank branches in Ansan, Gyeonggi, home of the volleyball club.

Since the bank promised that it also would give 0.5 percentage point if the team made the playoffs, add it all up and deposits would earn 5.6 percent interest for a year, nearly double the prevailing rate.

The case of OK Savings Bank is just one example of a financial company offering promotions related to its sports club’s performance. Even for customers who are not huge sports fans, such promotions offer good opportunities to support teams sponsored or run by financial companies.

Industry insiders say that following the Bank of Korea’s cuts in the benchmark rate that left most regular checking or savings’ interest rates below 2 percent, sports club financial promotions are attracting attention from consumers.

For Woori Bank, the deposit program has been a successful promotion. Last year, the bank offered a similar deposit offer, and those who joined the program at that time are expected to get a maximum 2.4 percent interest rate because the basketball team won the title.

For golf fans, Kookmin Bank is offering a special savings account program through July 29 related to the world’s No.2 ranked golfer, Park In-bee.

If the 26-year-old achieves a career grand slam by winning the British Open and Evian Championship this season, Kookmin Bank will add 0.4 percentage point to the savings account package that has a base interest rate of 2.1 percent for a one-year deposit and 2.6 percent for a three-year deposit.

If Park wins one of the two major tournaments, the bank will add 0.2 percentage point.

The base interest rate for the deposit program is 1.9 percent, while the savings account offers 2.25 percent.