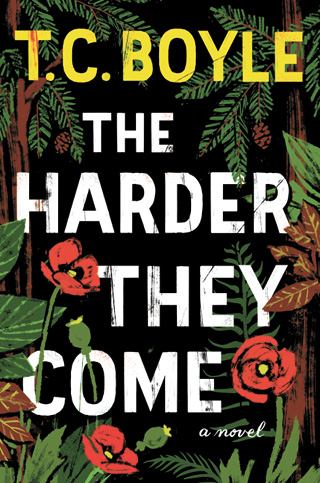 T.C. Boyle’s new book is about serious subject matters: a tourist from a cruise liner killing a robber at a port of call, a mentally ill young man running around with an assault rifle in the coastal forests of northern California, a radical movement that doesn’t recognize the legitimacy of laws or those who enforce them.

But Boyle delivers it all so engagingly, with character development that puts the reader inside the heads of the characters so that you know intimately what they are feeling and thinking, that it does not seem like a ``serious’’ book. It’s a damned fine one, though.

The poisoning of forests by large-scale marijuana growers, the conduct of the press, relationships between parents and children, mental illness, aging - these and other topics are delved into by Boyle in his eminently readable ``The Harder They Come,’’ his twenty-fifth book, according to his publishers.

``Sten’’ Stenson, a retired high school principal, is one of three main protagonists in the novel, the other two being his schizophrenic son and his son’s anti-government girlfriend. Stenson is dragged along by his wife on a Caribbean cruise with the desire to ``clear out the cobwebs, put your troubles behind you and come home refreshed.’’

It doesn’t work out that way after Stenson kills a robber with his bare hands. He returns home to find himself stressed out and hounded by the press that ``kept the whole thing going when all he wanted to do was turn the page and forget about it.’’

Boyle describes the 70-year-old Stenson watching himself on TV after a reporting team comes out to his house in Mendocino, California, to interview him. The way Boyle writes it, it is sad and hilarious but mostly hilarious.

``When it aired that night on the six o’clock news, he saw himself loom up on the screen like something out of one of the Japanese horror flicks he’d loved as a boy - Rodan, maybe, or Godzilla - his eyes blunted, his face scaled and gray and his big fists clenched on the arms of the chair as if he was afraid of falling out of it.’’

“The Harder They Come’’ is replete with such vivid imagery. There’s also a parallel tale about the exploits of 19th-century mountain man John Colter, whom Stenson’s son Adam tries to emulate, even to the point of adopting his name. But instead of engaging in mortal combat with Blackfoot Indians as Colter did, Adam is battling imagined aliens and trying to slow down the wheel inside his head that, if it spins too fast, removes him from reality.

Through the blending of the Old West with new West, Boyle reminds us that America has a violent history and all too often a violent present, one in which “active shooter’’ has become part of our language.

Beyond the page-turning dramatic events, Boyle describes the fragile humanity and emotional turmoil that lie behind the facades of even those who seem to be hardened, extremist or who are genuinely crazy. Readers might be sympathetic to what the characters feel, even if they don’t agree with their conduct. AP

“The Harder They Come’’