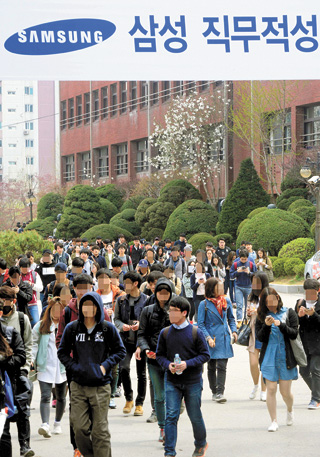 Applicants of the Samsung Group’s recruitment for the first half of this year walk out of Dankook University High School after finishing the Samsung Aptitude Test (SSAT) on Sunday at Daechi-dong, southern Seoul. [NEWSIS]

Amid predictions that this year will be one of the toughest yet for job-seekers, more than 100,000 college graduates desperately seeking employment at the nation’s two major conglomerates, Samsung and Hyundai Motor Group, took a written exam provided by the companies on Sunday.

A Korea Employers Federation report released on the same day said that the number of new hires at the nation’s 377 companies that have more than 100 workers each will drop by 3.7 percent from last year. The figure rose by 0.3 percent in 2014 from 2013.

Tensions were felt at schools where the assessments were being held. Applicants began gathering at Jamsil High School in Songpa District, southeastern Seoul, at 7 a.m.

The HMAT started at 8:35 a.m. and ended at 1 p.m. without a lunch break. The company provided a can of coke and a rice burger after it ended.

About 4,700 people will be hired by Hyundai Motor Group in the first half.

The mood was even more intense for Samsung Group applicants. Since the company will modify its recruitment system from the second half of this year, a number of people were taking the test before it changes.

Samsung allowed applicants selected after submitting their resumes to take the test this time. However, only those who pass an assessment evaluating their job suitability will be able to sit the SSAT in the second half.

About 100,000 applicants gathered across the nation and abroad to take the SSAT, according to the company.

The atmosphere at sites where the Samsung test was being held was very different from those providing the HMAT. Security guards blocked reporters from entering the buildings and details provided to the media last year were not given this time.

For example, last year Samsung told the press that the SSAT was taken in 82 places: 79 sites in Korea and three overseas, but numbers for Sunday were withheld.

“Though it was Sunday morning, the subway was very crowded with people holding studying materials for the SSAT,” said an applicant who took the exam at Dankook University High School in Daechi-dong, southern Seoul.

Among the 100,000 applicants, only about 4,000 graduates with no work experience will be hired.

The report by the Korea Employers Federation added that 59 percent of the 377 companies responded that they have already finished this year’s recruitment drives or hiring plans, the lowest in the last five years. It said about 27 percent of new hires will be experienced workers, a 1.9 percent rise from a year ago.