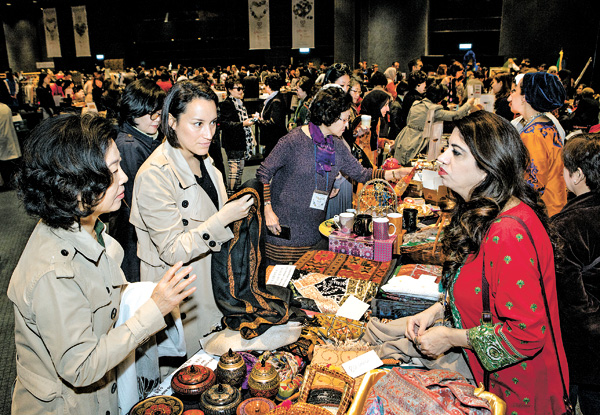 A fund-raising bazaar led by a local charity organization attracted more than 1,000 visitors last week at the Grand Hyatt Seoul in Yongsan District, central Seoul, thanks in part to the collaborative efforts of the Ambassadors Spouses’ Association in Seoul (ASAS).

The six-hour event, held Wednesday in the Regency Room, featured vendors hawking homemade food, handicrafts, jewelry and clothing from countries worldwide, and was jointly hosted by Planting Love and the Sisters of Charity of Seton Hill.

Celebrating its 25th anniversary this year, Planting Love has worked hand-in-hand with the Sisters of Charity of Seton Hill, focusing on fund-raising events for two schools run by the latter Catholic group: Eunhae School for the physically disabled in Gwangju and the St. Mary School for the blind in Chungju, North Chungcheong.

Alongside the companies selling their products at the bazaar were 37 members from the ASAS, representing Belgium, Serbia, Turkey, Azerbaijan, Italy, Poland, Colombia, Indonesia and Sri Lanka, among others.

All participating companies donated a portion of their earnings, and all proceeds made by the ASAS will go toward the aforementioned schools.

The host said the amount has yet to be calculated.

Choi Ja-hyun, the wife of Belgian Ambassador Francois Bontemps, clapped with joy when all her foodstuffs - freshly baked waffles, beer, chocolate cake and chocolate mousse - sold out an hour and a half before the bazaar’s close.

“It really was a priceless moment to feel international friendship among my ladies, because you can see here that even countries with weak ties with Catholicism have joined us today for a good cause,” said Choi, a Planting Love committee member who played a pivotal role in introducing her ASAS colleagues to the event.

Zofia Majka, the wife of Polish Ambassador Krzysztof Ignacy Majka, was proud to sell her native country’s pottery, Boleslawiec, adding that her participation in the charity bazaar was a “very special opportunity to help disabled children” and see their smiling faces.

Maria Giovanna Fadiga Mercuri, married to Italian Ambassador Sergio Mercuri, meanwhile, rolled out her country’s world-renowned biscuits and pizzas across not one but two booths.

“It’s very important to help in any way possible, and I think this charity event serves as a tool in that sense,” she said, adding that proceeds will be used to run vocational training sessions and psychotherapy for the handicapped.

Speaking in front of a table filled with rice pudding, corn cakes, brownies and coffee, Maria Claudia Latorre, the wife of the Colombian Ambassador Tito Saul Pinilla, said the experience reminded her of when she volunteered with seniors back in her home country.

“When I came to Korea a year ago, I heard about Planting Love from the Brazilian ambassador’s wife and have since been involved in various activities that required bonding with children,” she said. “I’m very happy to be in this country and to help the people here.”

Kim Young-hee, the committee chairman of Planting Love and the wife of Doosan Heavy Industries and Construction Chairman Park Yong-sung, took time to express her gratitude toward the ASAS.

“Compared to locals, foreigners tend to develop a really solid mind set for charity from a young age, and I can sense that from the ambassadors’ spouses in the way they join our group and really show initiative throughout various activities,” she said. “I’m content enough knowing that they will go back to their home countries with such fond memories of Korea.”