EXID to bring out 2nd album

EXID to bring out 2nd album 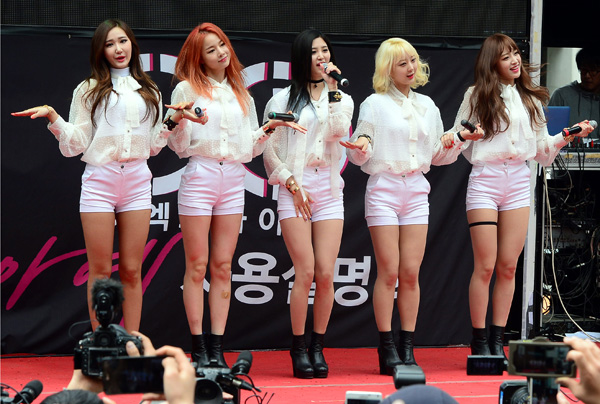 The girl group EXID will release their second mini-album “Ah Yeah” on Monday. Before unveiling the new record, the band tweeted a preview of it on Twitter in the latter part of last week.

EXID started receiving public attention for their song “Up and Down” in August 2014 after someone uploaded a fan-made video on Facebook of Hani, a member of EXID, dancing provocatively to the song in February of this year.

The five-member group made their debut in 2012 but did not receive any attention until the video went viral. After the video spread, the song topped music charts.

The group’s newest album was composed by Sinsa-dong Tiger, who has been the band’s producer since their debut.

The album consists of five new songs such as “Ah Yeah,” “With Out U,” and “IM” and two old songs, “Up and Down” and “Every Night.”

EXID held an outdoor performance titled “Instruction on Ah Yeah” before releasing the album in Myeong-dong in central Seoul on Sunday.

“When ‘Up and Down’ started gaining public popularity, EXID performed guerilla concerts in different parts of Seoul to show gratitude towards their fans,” said Yedang Entertainment, EXID’s agency.

“In order to thank their fans, the girl group decided to plan an outdoor performance,” the agency added.