Epik High gets award in China

Epik High gets award in China 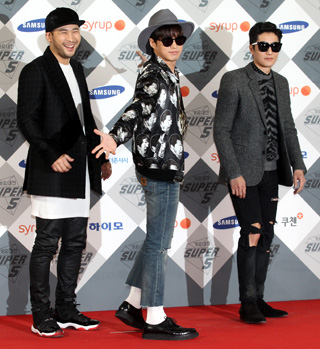 Epik High, a Korean hip-hop trio, was awarded “Best Performance Artist of the Year” in the Yinyue V-Chart Awards, one of China’s representative music events, on Saturday.

Along with the award, Epik High performed two of the group’s songs “Happen Ending” and “Born Hater.”

Epik High is also visiting various countries to perform shows. The group will go on the “Epik High 2015 North American Tour” starting in May.

The hip-hop trio will visit six different cities in the United States and Canada.

The group’s tour will start at The Warfield Theatre in San Francisco on May 28 before moving to Los Angeles on May 29, Vancouver, Canada on May 31, Dallas, Texas on June 5, New York on June 12 and Toronto on June 14th.

More concerts may also be added.

In addition to the hip-hop group’s tour in North America, they will also be opening a concert in Hong Kong on April 18.

The group will move on to Japan and hold concerts in eight different cities such as Osaka and Tokyo starting on May 3.

Epik High made their debut in 2003 with their album, “Map of the Human Soul.” Their latest work is their eighth album, “Shoebox,” which was released in 2014.