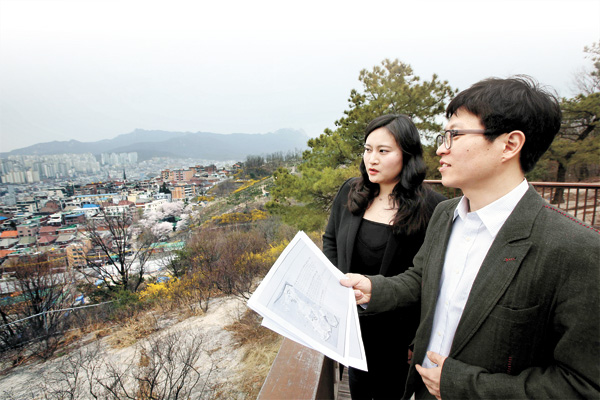 Jo Sin-il, left, and Jeong Seong-gap, members of a Shin Hae-chul fan club, walk around the Dream Forest in Beon-dong, northern Seoul, where a monument will be built for the late music legend. By Oh Jong-taek

The Seoul city government announced on Tuesday that it will erect a monument for Korean music legend Shin Hae-chul (1968-2014), who died due to medical malpractice last year.

The memorial will be constructed in Dream Forest, a park located in the center of Beon-dong, Gangbuk District, northern Seoul.

Fans will crowdsource the money to build the monument. It is planned to be revealed to the public on Oct. 27, 2015, the first anniversary of his death.

“Shin’s monument will be in similar style to that of the late composer Lee Young-hun, which stands on a street along the stone wall of Deoksu Palace [in central Seoul],” said a Seoul City government official.

Lee, a composer and lyricist of songs such as “Gwanghwamun Yeonga [Gwanghwamun love song],” which was written for the singer Lee Moon-sae, died of cancer in 2008. The monument consists of a stone inscribed with a list of his works, alongside a bronze sculpture depicting his face and a microphone.

Shin was born in Beon-dong and lived there until he graduated from high school.

Many of the songs the musician wrote when he led the rock band N.E.X.T in the 1990s were influenced by his days growing up in the area.

Shin experienced the urbanization of Beon-dong, and the region’s tumultuous transition is reflected in lyrics such as, “It was the first place that taught me death” (from the song “Fly, Chick!”) and, “Feeling a sense of loneliness even within the crowd” (from the song “City Life”).

The words of songs such as “Father and I,” “A Doll’s Knight,” and “Forever” all derived from the experiences Shin had during his teenage years.

Lim Jin-mo, a music critic, described Shin as “a writer in the first person,” meaning he used his own past to pen songs that were honest and which resonated with audiences.

The project to build Shin’s monument was first sparked through Twitter.

Jeong Seong-gap, a member of Shin’s fan club, tweeted at Seoul Mayor Park Won-soon, saying, “I want to erect a monument for Shin in Seoul, but I’m not sure how to get a permit.”

Mayor Park responded by saying, “I will consider it positively.”

Fan club members originally looked at a site in front of Hongik University, where Shin arranged spots for indie bands to perform.

But they changed their minds after observing Shin’s songs and his quotes in some books.

Shin Jin-sang, in his book “Why Did Murakami Ryu,” quotes Shin as saying: “I was performing an encore concert in Dreamland [a theme park formerly located in Dream Forest] in 1997. I saw a steep slope, which seemed familiar. After finishing the performance, I realized that the slope was connected to my old house. It turned out that I was performing at a place where I used to play baseball in my youth.”

Jeon said he went to look at Dream Forest last Tuesday and decided to set the memorial in front of a hill and a manmade lake, Wolyeongji.

“I want to make a space for Shin’s fans, as well as those unfamiliar with him, to peacefully watch over him,” he said.