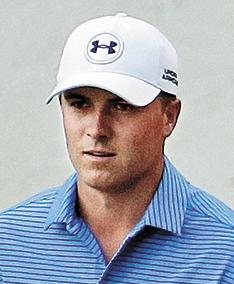 AUGUSTA, Ga. - Jordan Spieth walked off the 18th green Saturday with another Masters record, a four-shot lead and a solemn look that suggested he knew he was still a long way from being measured for a green jacket.

Spieth had a seven-shot lead with two holes to play and was 18-under par, a score that only Tiger Woods had ever reached at the Augusta National. Out of nowhere, he made a careless double bogey on the 17th hole. Ahead of him on the 18th, former U.S. Open champion Justin Rose poured in a birdie putt.

Just like that, the lead was nearly cut in half.

His gutsy short game saved him in the end. Spieth hit a flop shot from a tight lie to 10 feet and made par for a 2-under 70. That steadied the 21-year-old Texan going into a final round that no longer looks like a runaway.

On a day of charges and endless cheers, Spieth now gets to return and do it all over again.

Rose closed with five birdies on his last six holes for a 67, and that birdie on the 18th put him in the final group for the first time in a major.

Phil Mickelson wore a pink shirt in honor of Arnold Palmer because he knew he needed a big charge, and the three-time Masters champion delivered a 67, despite two bogeys on the back nine. Mickelson was five shots behind.

Woods and Rory McIlroy will play together in the final round of a major for the first time, but they are 10 shots back.

Spieth knew what he was facing even before he started.

Woods, who for three rounds has made everyone forget about that guy who shot 82 in the Phoenix Open earlier this year, ran off three straight birdies early in the round, and he threw a victorious fist pump after a most improbable birdie on the 13th hole. McIlroy made eagle on his second hole, went out in 32 and inched closer to Spieth on the back nine.

Both of them stalled.

McIlroy made bogey on two of the last three holes for a 68. Woods made a bogey from the bunker on the 18th for a 68.

The story line should sound familiar - a 21-year-old with a four-shot lead going after his first major at Augusta National. Four years ago, that was McIlroy, who shot 80 in the final round.

Now it’s Spieth’s turn, and he at least knows what to expect. A year ago, Spieth was tied with Bubba Watson going into the last round and had a two-shot lead with 11 holes to play until Watson rallied to win.

“I think the good thing for him is he’s already experienced it once,’’ said McIlroy. “He’s played in the final group at the Masters before. It didn’t quite happen for him last year, but I think he’ll have learned from that experience. I think all that put together, he’ll definitely handle it a lot better than I did.’’