A panoramic view of the fifth floor of the Gyeonggi Center for Creative Economy & Innovation opened by KT on March 30 in Pangyo, south of Seoul. By Seo Ji-eun

Those futuristic terms and related devices that may be new to most people are being tested and developed at the Gyeonggi Center for Creative Economy & Innovation, a facility that mobile carrier KT opened March 30 along with the local government and other public organizations.

Under the creative economy agenda pushed by the Park Geun-hye administration, conglomerates and major enterprises have joined forces with the government to open a series of innovation centers; the KT center in this technology hub, often compared to Silicon Valley, is the eighth of 17 planned.

Ten days after its official opening led by the Blue House and KT, tech reporters were invited for a tour last Friday and to talk to employees and heads of companies that have nestled into the space KT rented after seeing their potential. 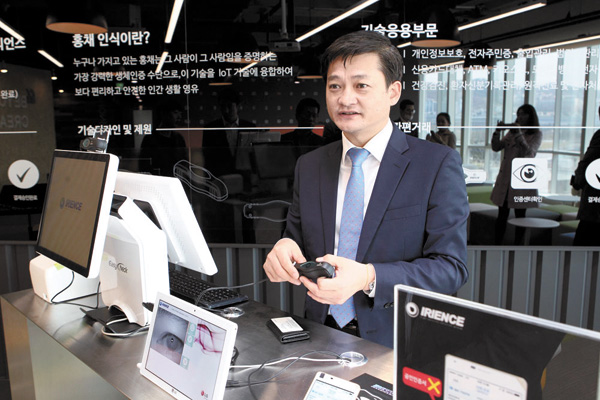 Spanning 16.2 acres on the first and fifth floors of a single building, the center is set to serve as a hub for start-ups and smaller companies interested in doing business abroad. The smaller first floor is mainly used for networking and meetings, and the much more spacious fifth floor accommodates labs and other facilities.

It has an IoT test bed that contains a collection of parts that will make it possible for developers to build their own platforms and apps, and test and eventually commercialize them. The room can be rented by anyone who books in advance.

Next to it is a 3D lab equipped with an impressive array of machines costing up to 100 million won ($91,516) - the most expensive can print 3D objects in colors - and any start-ups or individuals can use them if they pay for the printing materials.

KT also introduced three fledgling companies housed at the center. One is Anyractive, a mobile chalkboard platform provider that makes it possible to transform any screen, including a TV connected to a smartphone, into a chalkboard. Irience is an iris identification system operator that owns myriad patents with enormous potential for future applications ranging from security to payments, and Shyobe Creative is an interactive game developer that has uniquely blended games and videos featuring real people.

Having enjoyed the heyday of being the nation’s top landline provider, KT has been striving to replace falling profits from the saturated mobile telecom market and the creative economy center is part of that effort. KT contributed 10 billion won to the total 105 billion won fund for the facility.

Its bigger rival, SK Telecom, in October also promised to spend nearly 100 billion won for a similar center to mentor start-ups and SMEs in Daejeon and the administrative capital of Sejong in South Chungcheong.