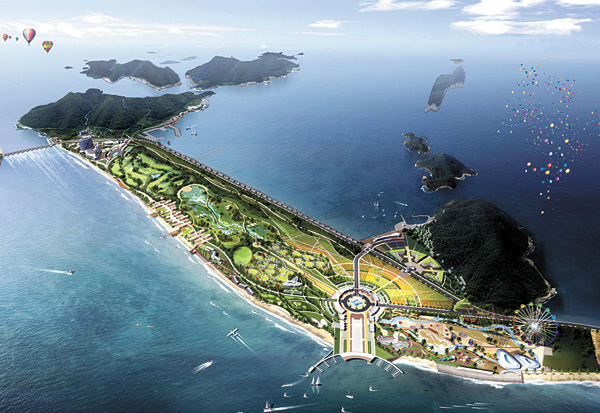 A bird’s-eye view of Gunsan’s Saemangeum tourism district. Provided by the company

Agriculture, particularly the cultivation of staple crops such as rice, has long been a major source of income for Korea.

With such history, Saemangeum should not be an unfamiliar term for many Koreans. Originally, the word referred to the area of the reclamation project that connects the coasts of Gunsan and Buan with a dike and blocks out seawater, creating new land. However, it has also come to refer to the numerous projects and economic activities taking place within the area.

The initial reason for constructing the 33.9-kilometer (21-mile) embankment was to have more land for agriculture. Securing enough crops to feed the nation became a top priority in the 1980s, when Korea suffered from the global food crisis.

Many countries around the world share similar concerns about increasing agricultural productivity. The Korea Rural Community Corporation (KRC) will participate in this year’s Water Forum to introduce the nation’s water management history to experts from abroad as well as fellow Koreans who wish to learn about how our society achieved agricultural growth.

Accounting for thirty percent of Saemangeum, the agricultural land is especially important because the key infrastructure needed for Korea to maintain global competitiveness in agricultural technology and exports is situated there.

The cutting-edge technology being developed here will lead to the ecofriendly production of high value-added crops. The construction of agricultural theme parks and arboretums is underway as part of ongoing efforts to secure infrastructure for ecotourism.

Listed in the Guinness Book of Records as the world’s longest tide embankment facility, Saemangeum was planned and built with Korea’s own technologies. The nation showcased its construction abilities by building as deep as 54 meters (177 feet) underwater, garnering attention not only for its agricultural technologies and capabilities, but also its industrial achievements.

However, the project ran into obstacles as environmentalists criticized the extreme pollution that resulted from years of construction. The entire project stalled because of the long and grueling conflicts with environmentalists, and in response, Saemangeum officials began to invest in ecofriendly development methods. As a result, the importance of sustainable development - a major goal of the international community - was not ignored during the most recent construction.

“We have come to understand the concern of environmentalists, and we are making efforts to turn things around,” said KRC officials. “Green growth should continue to be a priority as we join others in the path toward sustainability.”