[Sponsored Report] Yeongsan River success to be highlighted at forum

[Sponsored Report] Yeongsan River success to be highlighted at forum 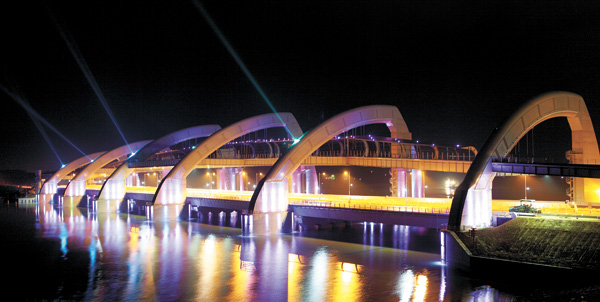 New floodgates were built at Yeongam Lake in South Jeolla to control its water levels. Provided by the company

The Korea Rural Community Corporation (KRC) will demonstrate its successful comprehensive agricultural development model at this year’s World Water Forum in Daegu and Gyeongbuk, using the Yeongsan River project as its main example.

As the fourth-largest river in Korea, the Yeongsan drainage basin covers roughly 23 percent of South Jeolla. Since a high proportion of that area is used as farmland, a huge demand for water had always put a strain on the limited amount of resources in the region as well as its poor water supply facilities.

With the construction of four dams, estuary banks and improved irrigation and distribution channels, the region has witnessed numerous positive changes over the course of 40 years.

The long and ongoing process started in 1972, with four dams being built in Jangseong, Damyang, Naju and Gwangju. Since then, almost 4 trillion won (3.6 billion dollars) has been invested in increasing these agricultural benefits. 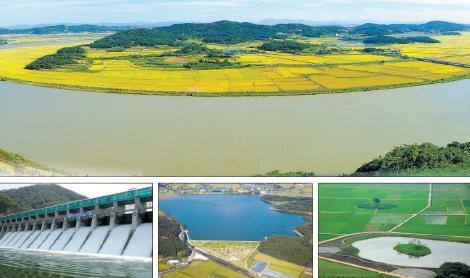 The Yeongsan River development project in South Jeolla has changed the landscape of the area over the course of 40 years.

As a result, nearly 76,780 acres of land has been expanded for farming, industrial and urban use. Most importantly, there have been marked improvements in irrigation and the distribution of water. Furthermore, extra investment in improving breeding and other farming techniques allow the production of an additional 0.4 ton of rice per acre at a maximum.

In addition to securing and supplying enough water, effective water management is another goal for the Yeongsan River development project. Newly installed pipelines across the basin area are being used to provide water effectively to rice paddies and other farmland. Efforts to allocate the right amount of water according to the needs of different areas have been continuously made, requiring even closer observation in the measuring and distribution processes.

On the other hand, estuary banks built during the project have contributed to achieving one of the most important goals - preventing damage caused by natural disasters. Floods and droughts frequently devastated the area before the project started. As a result, structures were built to mitigate the level of damage. Specifically, estuary banks were constructed to protect fields from being flooded with seawater.

However, the construction of manmade structures has not always been helpful. Deposited sediment on the estuary banks eventually led to floods again. Furthermore, pollution levels skyrocketed, severely threatening the water’s quality.

In order to solve these problems, the government kicked off initiatives to make structural improvements for the estuary banks in 2010. As a result, the floodgates are being expanded to twice their original width while draining capabilities are to be improved in order to prevent floods.

Although there has been trial and error, the project has achieved overall success in various aspects. Most importantly, improved land use and newly installed facilities have led to higher agricultural productivity. The previously inefficient management of water has become more systematic and continues to grow in a stable manner. The measures taken to help flood-prone regions avoid future disasters were much needed.

Ultimately, the success of the project will lead to local economic growth. The increased water supply will support industries and households. In addition, other industrial benefits are anticipated for the near future, with the Daebul Industrial Complex and Bitgaram Innocity being built in the region.

“The significance of this project lies in its comprehensive nature,” said KRC President Lee Sang-Mu. “Instead of pinpointing a single area of development, we seek overall growth in agriculture, the manufacturing industry and the local economy. So, various technologies required in that process have come a long way as well.”